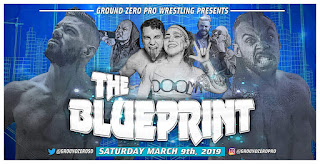 “Uptown” Andy Brown retained the Ground Zero Championship against Tyler Bateman in the much anticipated Title Rematch on January 19th. After Brown won the contest in another war against the Goddamn Man it looked like sportsmanship would prevail. However after Sarah Wolfe implored him, Bateman viciously attacked Brown until Douglas James intervened. The returning James made it clear to Brown that he wanted a shot at the Ground Zero Championship.
“Relentless” Douglas James was one of the favorites going into the Ground Zero: Champion tournament to win the Inaugural Title. Unfortunately an injury curtailed those plans, and James has returned to Imperial Beach to put that plan back on schedule. Brown and James are terrific and ALWAYS have great matches. They had a classic time limit draw in May with FIST Combat, and James won the return bout and that Gold a month later.


Now James wants to pick up where he left off at Ground Zero against his familiar foe. He will get the chance on March 9th in Imperial Beach at Ground Zero: The Blueprint. Brown would like nothing more than to beat James, and prove he is the undisputed Champ. Beating Bateman twice and then James would leave no doubt in anyone’s mind who the undisputed Champ is. This isn’t the same Andy Brown that James saw when he was injured as Brown struggled prior to the GZ Tourney. The tourney invigorated him and he’s found the form he had early in 2018. This is a BIG TIME matchup between two of the best guys on the Indie Scene.
at January 31, 2019