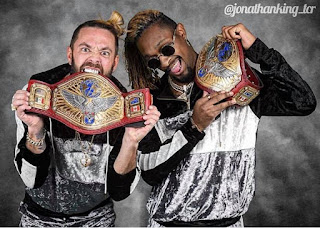 Congratulations to Double Platinum (Chris Bey and Suede Thompson) in winning the United Wrestling Network (UWN) Tag Team Titles Sunday during the Championship Wrestling from Hollywood (CWFH) TV Tapings. DP beat the RockNES Monsters (Yuma&BHK) for the Titles after losing to Yuma and BHK last month for the previously vacated Gold. This is the first time the duo has won UWN tag Gold and is poised for an extended run with the Titles.
Bey and Suede were Future Stars of Wrestling (FSW) Tag Team Champions in Las Vegas last year and clicked as a team after competing in an epic Best-of-Seven series that Chris took 4-3.
As the Bag Boyz they upset One Percent for the FSW Belts last fall, but unfortunately, their run with the straps was a brief one. They dropped the titles to One Percent on December 1st, and then set their sites on the UWN belts.
These two are entertaining in the ring, to say the least. Not to mention talented wrestlers. Suede Thompson is in the best shape of his life at 33 and credits Bey with helping him get there. Chris Bey has been killing it in Las Vegas and still has folks talking about his performance on IMPACTWrestling here two weeks ago. They've improved their double-teams and are much more assertive together which comes with experience. I hope they get a chance to shine under the bright lights of Hollywood. CWFH will not be disappointed.
at February 26, 2019