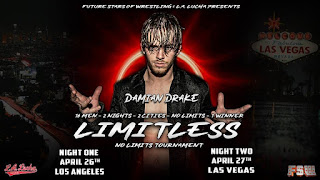 Future Stars of Wrestling (FSW) hosts the Lethal Lottery Saturday night February 23rd at the FSW Arena 6035 Harrison Rd. Las Vegas, NV. The Main event will be “New Age Daredevil” Damian Drake defending his No Limits Title against the winner of a Battle Royal featuring 20 competitors. The Battle Royal opens the festivities Saturday evening in frigid Las Vegas.
Here’s a breakdown of the six names FSW confirmed yesterday:
Ice Williams – Is there anyone hotter in FSW right now? Ice is undefeated at the FSW arena this year and if that continues then he’ll leave the building with the No Limits Title. The kid is wrestling with a ton of confidence and is not someone I would want to see across the ring right now. Besides the Mo-Mentum Williams has in his corner he presents tons of issues for Drake in the ring. His length creates problems allowing him to keep his distance and Ice can go anywhere the match goes. In fact, Williams prefers a wild and crazy contest. This would be a good one. 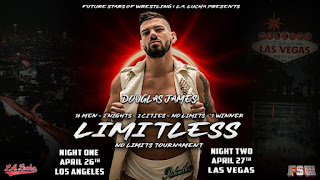 Douglas James – DJ returns after his #instantclassic with FSW Champ Chris Bey two weeks ago and looks to get another shot at gold this weekend. James is dangerous in any match he competes in, and this is no different. His superior mat advantage won’t matter as much in a battle royal, but the “Relentless” one is very smart and always finds himself in the right position with top shelf ring awareness. The former No Limits king beat Drake in Hollywood prior to his injury, but the Champ is stronger and much improved since the chop war left him carved up. Note to self: Don’t get in a chop war with DJ.
Matt Vandagriff – “The Flip Artist” surprised some in January (me) when he upset Suede Thompson at the Arena earning a spot in the No Limits Scramble. Vandagriff came up short there, and two weeks ago when he secured a title shot against the Champion. Drake won with a vicious knee to the back of Matt’s head that turned out the lights on his evening. Vandagriff needs to do a better job of keeping his distance in a rematch should he be the last one remaining.
Owen Travers – “Chief” Owen Travers returns to Las Vegas in an attempt to regain his No Limits Title. Travers is one of the most intelligent wrestlers out west and the Battle Royal requires it. This is the guy I’d least like to see if I’m the “New Age Daredevil” because these two know each other so well and the “Chief” is due for one against Drake. Travers may have the best chance to unseat the still freshly minted Champion. 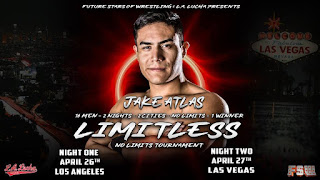 Jake Atlas – The “Superstar” Jake Atlas has been a title-winning machine and may add another Saturday night. Atlas is on a roll and just his pure athleticism makes him a threat in the Battle Royal and he won’t be easy to eliminate. Jake is poised for a breakout year and winning the No Limits gold would push him through the roof. This isn’t the best matchup for Drake for two major reasons; First, Atlas is very strong and welcomes a war, and second, he’s just as capable in the speed game. Very Dangerous.
Spyder – And then there’s this guy. Only Drake’s former tag team partner who he won tag team gold with. Only him. The only one who knows Drake better than Travers is Spyder. They’ve had those conversations on the road, and he knows what makes the Champion tick. The skirmish on the ramp at No Escape was enough to convince me there’s something here. After that incident, their relationship hasn’t been the same, and Spyder would like nothing more than to rip the title away from his “friend”.
The last two wrestlers eliminated from the Battle Royal may not get to face the No Limits Champ Saturday but they will earn the right to wrestle each other. Yep, the last two will compete against each other on the card later in the evening. Any combination of those six would be great and I’m sure there are some strong mystery grapplers up Joe DeFalco’s sleeve.
Tag Team Champions One Percent (Royce Isaacs & Jorel Nelson) will defend the FSW Tag Team Titles against the winner of a three-team gauntlet match. The teams in the gauntlet will be determined by blind draw after the Battle Royal. No matter how good One Percent has been in Las Vegas and all over the west, these are the most worrisome title defenses. You don’t know who you’re getting and you must be ready for anything with little time to prepare. However, the advantage is that the Champs will be fresh, and right now I don’t think it matters who they face in an FSW ring. You can put a dollar sign on that.


Shogun Jones looks to continue his climb back up the FSW Title rankings against Suede Thompson who needs a win. Don’t write off Suede in this one, but this is a massive challenge against Shogun.
at February 21, 2019