The “Puerto Rican Pit Bull” Gino Rivera is crass, cocky, arrogant, annoying, doesn’t like you, me, his opponents, or anybody else for that matter. He wins a lot of matches and is the first one to let you know it. That’s why he is becoming one of the top heels in the Southwest. It’s become old hat to mention a top prospect as a Santino Bros product. That’s all they churn out of the Cali juggernaut. Many top young stars count themselves as alumni like Brody King, Jake Atlas, Matt Vandagriff, Heather Monroe, Eli Everfly and Douglas James. 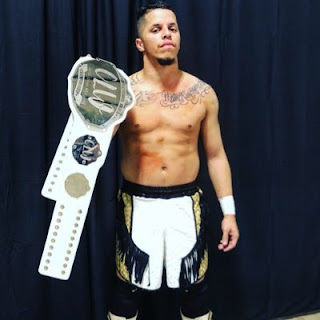 The Pit Bull isn’t making his bones on the coast though. Rivera went east to Championship Wrestling from Arizona and became their first Champion, is the current Destiny Wrestling Organization (DWO) Full Access Champ in New Mexico, and competed on 205 Live. Gino Rivera is exceptional at generating heat, and the boos inspire his very strong mic skills.
His ring skill is deceptive. He doesn’t have big power moves, but he is great at gaining leverage utilizing various face slams. Gino uses short quick strikes to keep opponents guessing and has no problem mixing in hair pulls, eye pokes, joint manipulation, or a handful of tights if need be. What he really likes is to grind his opponents to dust. Rivera viciously worked Watson’s arm in CWFA recently bending, twisting and slamming it all over the ring. Watson was visibly uncomfortable following the match despite getting the win. The former CWFA Champion can compete with bigger opponents, and does it without a lot of quickness or aerial moves. Rivera is capable of flying but prefers to punch you in the face regardless of your size. Despite this tendency, he’s smart enough not to get in a slugfest when at a size disadvantage.


Not many people can get under your skin like Rivera. As soon as he gets in the ring he irritates you. That’s what great heels do. He walks to the ring with enthusiasm to piss you off and win Titles.
at February 17, 2019