The Rascalz in Main Event at Lucha 3:16 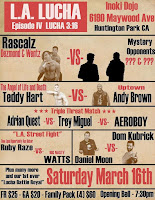 LA Lucha has made several big announcements for their fourth show on March 16 appropriately titled Episode IV LUCHA 3:16. The Main Event features IMPACT Wrestling's The Rascalz (Zachary Wentz, Dezmond Xavier) against an opponent we will find out tomorrow. Been going through my mind on who the opponent is, but some of the teams I've considered are booked already that night.

A couple nice bouts on the card. Ruby Raze vs Watts is obvious. These two beasts are going to beat the crap out of each other, and anything not tied down will be fair game to use. Stoked for Andy Brown and Teddy Hart. Hart is great to watch and at 39 may be at his best, but so is "Uptown." Brown has been on a roll in SoCal and recently returned to Las Vegas and picked up a win against Suede Thompson. A win March 16th against Hart might put Andy on the fast track.

I'm rooting for LA Lucha. This team has a lot of passion and enthusiasm for the sport with a real determination to do it right. The partnership with FSW is a good building block and could be the way to do business in wrestling for years to come.