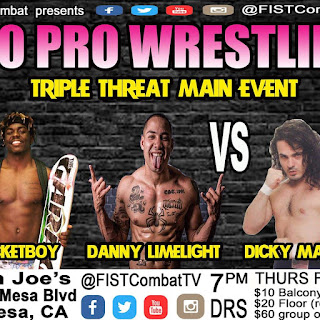 Tomorrow night February 7th Jolt’n Joes in La Mesa, CA hosts Fight Combat: Triple Threat. The Main event features a Triple Threat match for the GetFIST’D TV Title between Champion Rocketboy Wilson, Dicky Mayer, and FIST Combat Champion Danny “Limelight” Rivera. This is a grudge match straight and simple. Rocketboy Wilson was in a ladder match against Matt Vandagriff when “Limelight” came to ringside to cheer on the “Flip Artist”. Wilson took exception to it and super-kicked Rivera.
Rocketboy continued the contest and had the challenger out. He climbed the ladder only to be taken down by the FIST Combat King. Rivera climbed the ladder and took the belt setting up the match tomorrow night. Matt Vandagriff was originally booked but confirmed he was no longer on the card. He was replaced by Dicky Mayer who earned his spot in the matchup with a Four Way win against Hunter Freeman, Veinom, and Motrus Jungle. Mayer recently returned from competing in Japan at the end of 2018.
Also on the card the FIST Combat Tag Team Champions the Wolf Zaddies look to continue their path of destruction against Dylan Kyle Cox and Hunter Freeman. The Wolf Zaddies ended True Grit’s FIST unbeaten streak and took the tag titles. Bad Dude Tito and Che Cabrera are looking to hurt people and Thursday night will be no different.
Get ready for another great night of FIST Combat wrestling at Joe’s where the action comes to you.