For the first time in Big Valley Wrestling history, there will be a Chain on a Pole Match for the BVW Championship. Two grudge matches with Titles on the line headline the card at the Sahara Events Center 800 E. Karen here in Las Vegas, NV. BELL TIME 2PM.
Heavyweight Champ Frank the Tank will defend his title against “The King of the Lemonade Stand” Manny Lemons in the Main Event. Big Valley Wrestling in their official announcement on Facebook makes it clear, “The Steel Chain will hang on a pole attached to the ring, a pinfall or submission cannot be made until the chain has been retrieved, the participant who retrieves the chain can USE the chain. The Steel Chain can break, bound or better the participants of this match.” Manny Lemons asked for this match after Frank used the chain against Manny to retain the Title on February 10th at High Tension. Sunday is the beginning of what could be the biggest week in Lemons’ professional wrestling career. He can win the Big Valley Title on Sunday and then return to his home state of Utah and become the first Devotion Championship Wrestling Titleholder on Saturday, March 9th in Salt Lake City.
The Champion is not to be overlooked. Frank is more agile than he looks with solid footwork and delivers heavy, stiff blows wearing down opponents. He is very tough to take off his feet, and Manny will need plenty of Lemons to withstand the punishment and avoid being the recipient of the chain. 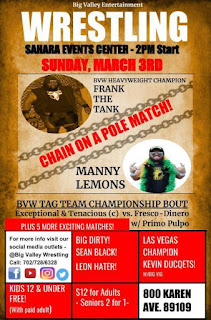 It’s not a match for the faint of heart, but when the Big Valley Heavyweight Title is on the line you’ll go to extremes you never thought you were capable of.

“Exceptional” Alexander Braven and Ricky Triforce Tenacious attempt to hold the BVW Tag Team Titles for one complete year Sunday against their bitter enemies Fresco Dinero. Fresco and Dinero came to the ring dressed as the Tag Team Champions completely humiliating the Champions at High Tension. To complete the Number One Contenders each won in singles action against the Champs. The challengers certainly seem to have momentum on their side going into this match, but don’t count out Exceptional and Tenacious. You don’t hold onto any Tag Team Championship for a year by accident or luck, and they’re ready to prove to everyone they’re the best tag team in Las Vegas.
If you didn’t see the Street Fight in February between Las Vegas Champ Kevin Ducqets and Leon Hater go to YouTube and watch it then come back here. I’ll wait……….Great match right??? I know. The fact Big Vig got involved just made it more interesting. He’s the Champ’s insurance policy? We’ll see…
I’ve heard the argument that Hater should get a rematch because of Vig’s involvement, but it was a street fight so anything goes. Ducqets could have the Tag Champs and Frank the Tank interfere and it’s all legal. I would love to see these guys do it again with even more baking pans and chairs.
Also appearing is Santana Jackson star of MJ Live.