We found out last week that FSW No Limits Champion Damian Drake, “Superstar” Jake Atlas and “Relentless” Douglas James have earned their spots in April’s two-city Limitless Tournament. Today we found out two of the Limitless Tournament qualifying matches will be held at LA Lucha’s Episode IV.
Former No Limits Champion “Chief” Owen Travers will face Sonico on March 16th. It’s a surprise to see Travers in a qualifier after his extended No Limits Title reign, but maybe the loss last week to “The Flip Artist” Matt Vandagriff at the FSW Arena pushed him here. It’s a tough spot because Sonico arrives from Seattle with a great reputation and is a dangerous opponent for the former Champ. Travers had trouble with The Flip Artist’s aerial attack and he’ll get more of the same from the Seattle lucha. Sonico enters the ring at the Inoki Dojo with a lot of hype, and Travers has been in the ring with guys like this before, so what gives in this qualifier that’s sure to be a good one? 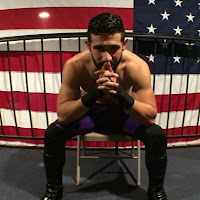 2018 SoCal rookie of the year Dom Kubrick takes on another young star in Daniel Moon. Moon
teamed with Young Fuego Adrian Quest against FSW Tag Team Champions One Percent (Royce Isaacs & Jorel Nelson) at Episode III. Moon has seen his star rise recently, but Kubrick loves the spotlight too. He competed last week in Las Vegas, and hopes for a return trip to the Fight Capital starting with qualifying for the Limitless Tournament. Both men can fly around the ring, but Kubrick’s strong grappling skills to go with the mind games he attempts to play might be the difference in this one.
at March 01, 2019