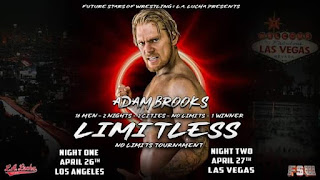 Three more stars have been added to the Limitless Field in April including one of the finest grapplers from down under Adam Brooks. The G.L.O.A.T. (Greatest Ledge of All Time) makes his LA LUCHA debut in round one along with two of SoCal's top guys Matt Vandagriff and Eli Everfly. "Brooksy" is from Melbourne, Victoria, Australia and is a four-time Melbourne City Wrestling (MCW) Intercommonwealth Champion, and is the current Adelaide City Champion. The 5-11 176 pounder has also competed in the United Kingdom and here with Pro Wrestling Guerrilla, Combat Zone Wrestling, and Maverick Pro. He's a massive threat to the win the whole thing and you could argue he warrants the top seed.
There are now 8 competitors announced for the two-night two-day event April 26th and 27th in Los Angeles and Las Vegas, FSW No Limits Champion Damian Drake, "Superstar" Jake Atlas, and "Relentless" Douglas James were announced earlier and "Dirty" Dom Kubrick, and "Chief" Owen Travers qualified in Los Angeles March 16th.
Two more qualifying matches are scheduled to take place April 12th in Las Vegas.
at March 28, 2019