MECCA MATCHUP: "The Problem" Sefa Fatu vs "The Business" Hammerstone 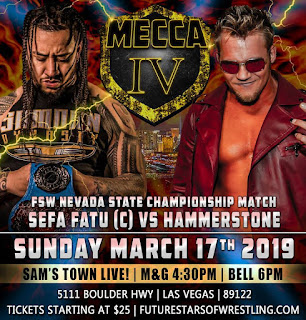 It's "The Problem" vs "The Business" for the Nevada State Championship. The Champion Sefa Fatu fears no one and comes to MECCA IV as dominant as any Nevada State Champion in Future Stars of Wrestling history. Hammerstone held the FSW Title longer than anyone and comes to the Fight Capital looking to show the upstart that he ain’t left yet. “The Problem” beat Graves to win the Gold and then had to fend off the monster from Arizona Gabriel Gallo. He’s been in there with big guys, but none with Hammerstone’s athleticism and devastating power game. “The Business” was embarrassed last time out by Douglas James and wants to rectify that against the future of The Samoan Dynasty.
Here’s the MECCA MATCHUP for Sefa Fatu vs Hammerstone:
When Sefa’s on Offense he wants to use his very consistent strike game. Open hand strikes can arrive from any angles, but just like his future WWE HOF brothers, the “Superkick” is real. He can connect in tight space which is rare but doesn’t want to get too close to Hammer to avoid the vice-like grip of the 250 pounder from Glendale, Arizona. Sefa has a very smart aerial game, knows when to utilize it, and the Frogsplash ends fights. One thing Fatu has learned is patience. He knows when to step away and that’s smart because Hammerstone’s pressure is suffocating so a patient methodical Gameplan will be key. One wrong move and he gets caught in a slam or suplex and the whole fight changes. If the pace quickens Fatu still must be careful of the jump kick. It’s not Hammer’s most effective weapon, but when he hits it opponents go down hard.
Fatu’s Keys to Victory: Maintain range and distance with crisp accurate strikes. Don’t make it a power match.

When Hammerstone’s on Offense he wants to close the distance and apply constant pressure. There are no frills to “The Business.” He wants to grab a hold of you as quickly as he can and slam you like a rag doll. Simple and straightforward, very tough to stop. Hammerstone is one of the strongest grapplers in Wrestling and once he gets you in his mitts it’s not easy to escape. Fatu wants to be in rhythm, and Hammerstone must smash that. He needs to set the tone right away and rarely is that an issue, and wants to make sure the youngest Fatu doesn’t gain any confidence. Hammer wants to push the match in the corner where he can suffocate the Nevada State Champion with dirty boxing, throwing elbows, and knees. The 28-year-old is very adept at setting defensive traps for his explosive jump kick. The move isn’t always accurate, but Hammer loves to throw it and he’ll connect if given enough chances. Even if it doesn’t hit the chin, a shot to the sternum or shoulder puts you down. Not many out West execute a power game like “The Business” and it could be a major problem for Fatu.
Hammerstone’s Keys to Victory: Close distance, Apply pressure with dirty boxing. Set Transition Traps. Championship Experience