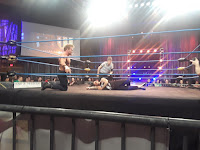 Sefa Fatu retained his Nevada State Championship last night by disqualification against Hammerstone last night at MECCA IV. The match had the potential to be a war and it was. Both men used everything in their offensive arsenal to get the win. It looked at one point that Hammerstone was going to close out the match. He started taunting the Champ with “you’re not ready for this.”
Unfortunately for Hammerstone the Uso was ready. He fought back and gained control of the contest with quick strikes and a Superkick that put “The Business” down. After some back and forth Hammerstone took the Nevada State Title and knocked out Fatu. However, the Champion recovered and did damage of his own before the former FSW Champion scrambled down the ramp. The FSW faithful have embraced Fatu in his title reign and he’s even beginning to warm up to the fans. Nothing is going to change the young Uso’s intensity and he needs it because the FSW Championship Committee isn’t keen on granting easy title defenses in 2019, and 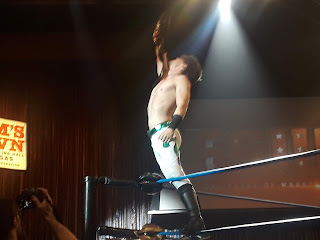 Fatu ain't looking for them.

Speaking of young Champions “The New Age Daredevil” Damian Drake retained his No Limits Title in the opening match Scramble that set the bar high from the jump. Douglas James, Matt Vandagriff, and Trey Miguel put on a display of high flying athleticism Sam’s Town hasn’t seen in a while. As usual, the Las Vegas crowd was slow to arrive and too bad so sad for them cuz this one was awesome. Drake got the pin and now will be able to focus on next month’s Limitless Tournament. Two more qualifiers will take place April 12th for the 16 man Two City, Two-night tourney. Drake made his Ring of Honor debut Saturday against Chris Bey, and I saw Drake Friday the night before his debut. He sat alone and watched all the matches very intently. He was probably going over in his head what he would do the following night, and it reminds me of the story Stone Cold tells about Dutch Mantell. Mantell told Austin to look through the curtain and watch every match. He did and the rest was history. Drake is passionate about his craft and it shows as he keeps piling up impressive win after impressive win.
at March 18, 2019