Last night I went and saw Ring of Honor 17th Anniversary at Sam’s Town and what a terrific show. I’m going to Los Angeles today to see LA LUCHA’s Episode IV and then, of course, The MECCA on Sunday back here. ROH 17 was one of the best live shows I’ve ever been too. The ROH crowd is in it from the beginning and never gets stale. It’s a lot more fun to invest in the matches when everyone else does too. Here are some takeaways from last night:

SUEDE! SUEDE! SUEDE! SUEDE! – FSW and Las Vegas' own Suede Thompson came to the top of the ramp and those of us who knew cheered enthusiastically. It was a great surprise to see him and he wrestled well against Brian Johnson. I spoke to Suede after the show to congratulate him turns out ROH asked him that night Thompson said, “They asked me do you want to wrestle? I said ya.” He was ready to wrestle just in case. Says a lot about the guy which is why Suede is such a respected professional and accomplished grappler. He’s currently one half of the UWN Tag Champs with his brother Chris Bey. Super stoked for you Suede!

LETHAL VS TAVEN EPIC! This was my first 60 minute time limit draw live and I didn’t even realize it had been that long. The bell rang, Time Limit Draw was ruled by the assigned official, and Marty Scurll took the belt. The match was terrific as both guys fought like hell. I thought Taven had a chance to win it last night. He kicked out of 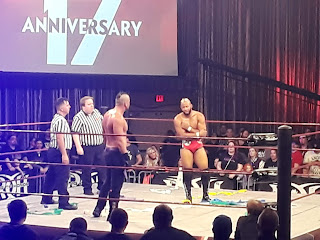 TWO Lethal Injections and dodged a splash on the ladder by the Champion. Lethal hooked the figure-four on the Challenger and multiple times it looked like a tap was imminent. Taven was able to find a way to reverse and the back and forth exchange had the gripped on edge. Except for this dude a couple rows behind who kept unceremoniously crying for the end. The match was a classic and took me back to those 60 mins psychological wars of the eighties and early nineties. Well done Gentlemen.

THE BRISCOES ARE HERE – and they lost the belts. It was my first time seeing them live and they lost the titles. I didn’t think they would, but Brody King and PCO went out and earned it. It was a brutal match with multiple guys getting busted open. Jay Briscoe after going hard into a chair in the corner and the monster PCO because of

requested Kendo stick shots. Yes, there was actual blood in a Street Fight and it didn’t scare the kids away. Bully Ray did that just fine earlier. Kids on the front rail, he yelled, they ran, classic heel stuff. Dem Boys are one of the greatest tag teams of all time and the match was superb.

Looking forward to Los Angeles tonight. Hammerstone vs Gage and Brown vs Hart are the matches that stand out to me, but frankly any matches with Hammer and Brown I’m interested. Teddy Hart created a traffic jam for folks trying to get out of Sam’s Town Live last night posing for pictures with fans and handing out drink tickets to the Nerd Bar show downtown. I didn’t go cuz if I did you wouldn’t be reading this. The LA LUCHA team works their tails off and I’m excited to go check out what they got goin’ on. Good luck tonight!