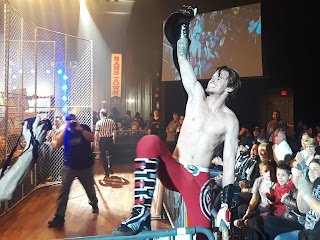 Future Stars of Wrestling No Limits Champion Daredevil" Damian Drake was chosen by Konnan at a tryout in Las Vegas to make his debut in Tijuana this weekend with Lucha Libre AAA Worldwide (AAA). The Champ has been on fire since winning the Title at No Escape January 25th at Sam's Town Live. His opportunity came Saturday before his MECCA IV Scramble win on St. Patrick's night. The New Age Daredevil was in a brutal battle with Nick Bugatti Saturday night at the FSW Arena where he retained the Strap by Disqualification.
No confirmation on his opponent in Mexico.
AAA was founded by Antonio Pena in 1992 with Konnan among others when they Consejo Mundial De Lucha Libre (CMLL) to start their own brand while pursuing more creative freedom. Still going strong the company has working relationships with IMPACTWrestling, Major League Wrestling, All Elite Wrestling, and Pro Wrestling NOAH in Japan.

Congratulations to The New Age Daredevil