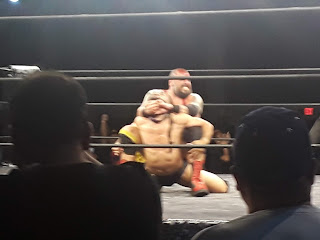 Major League Wrestling (MLW) debut "took me back." As I said it Almighty Sheikh (Josef Samael) exclaimed, "It was dangerous, we're bringing danger back." His partner "The Samoan Werewolf" Jacob Fatu laughed alongside him. "There were points," I told them, "When I had to look away, but I was still cheering watching them on my computer."
Sheikh said, "Because it was dangerous. We're making wrestling dangerous again." It's exciting to see them bust the boundaries of acceptability the other direction. Wrestling in some areas has gotten softer and this is a much-needed change. Family friendly live events and shows are great. It's importantt he business can bring in new fans and if their parents won't allow them to watch then it hurts the long game.
Do these matches have to happen every time, no? Then you have the opposite effect and burn out the fans. I loved what they did and I'm very happy I had a chance to cover WrestleSummit and see them in action.
Fatu said, "We're glad you were clapping at your computer, and we're gonna bring some danger tonight too." With that said, the Sheikh laughed and smacked the enormous chest of his partner. They won the DEFY Tag Team Titles Friday winning a Triple Threat "All Violence Is Legal" Match against One Percent and Sent 2 Slaughter. They've never lost in an ULTRA ring and it'll be a while before they lose in MLW too.
at April 02, 2019