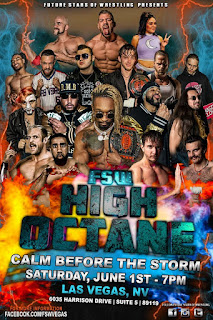 The FSW Tag Team Division is getting stronger as Future Stars of Wrestling confirmed that Bad Dude Tito and Che Cabrera will return to Las Vegas on June 1st at the FSW Arena. No word on their opponent at press time. They’ve been one of the top teams in Southern California and faced former FSW Tag Team Champions the Bag Boyz (Chris Bey & Suede Thompson) in the Fight Capital last year. With the announcement days ago that the Soul Burners (Tomaste & Ryan Taylor) were returning and now with these two, One Percent’s (Royce Isaacs & Jorel Nelson) schedule just got a whole lot busier. Both are very dangerous opponents for Isaacs and Nelson who have been totally dominant in Southern Nevada since their formation last summer.
Che and Tito are tough nasty guys looking to hurt someone and the game plan works because they’ve won Championships nearly everywhere they’ve been. They’ll have their sights set on the FSW Belts and will stop at nothing to get them. Their snug, physical style is tough enough to prepare for much less endure over the course of a match, and are experts at cutting the ring off with brutal double teams and grinding opponents to bits with surgical efficiency. It’s great to see the Tag Division get a small remodel bringing new opposition for the Champions, and Saturday night may provide a clearer picture of who 1% will face at the FSW 10th Anniversary.