One Percent and Double Platinum Battle by the Bay 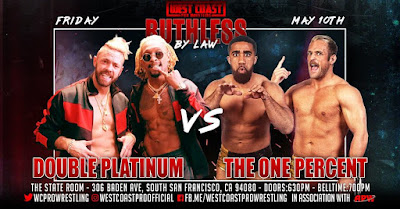 On Friday, May 10th in San Francisco West Coast Pro Wrestling presents: Ruthless By Law and features a tag team match between two teams that have a unique relationship together. Double Platinum (aka Bag Boyz)(Chris Bey & Suede Thompson) will face their old rivals from Las Vegas One Percent (Royce Isaacs & Jorel Nelson) and will take their rivalry to the Bay Area. Last February Suede Thompson won the Percy Pringle III Cup by defeating Royce Isaacs. After the contest, Isaacs would meet Jamie Iovine and would sow the seeds of Championship Wrestling from Hollywood (CWFH)Double-Championship. Isaacs would eventually become United Wrestling Network TV Champion and Hollywood Heritage Titleholder during the end of 2018.
Thompson went on to have a Title match in Combat Zone Wrestling (CZW) against MJF but was unsuccessful. He then had a Best-of-Seven Series last summer against Chris Bey. It was a series that was the talk of the summer as “The Ultimate Finesser” took the #InstantClassic at Championship Wrestling from Arizona (CWFA) AZ100 4-3. Once fierce combatants the two men united into Double Platinum/Bag Boyz and won the FSW Tag Belts from One Percent in October last year. They dropped them in December to One Percent at the FSW Arena in Las Vegas. DP beat RockNES Monsters for the vacant UWN Tag Team Titles before dropping them to Reno  Scum. They’ve also been getting booked elsewhere in California, and arrive in San Francisco to face their familiar foes. Bey and Thompson have really begun to gel as a team.
Speaking of cohesion none can match what Isaacs and Nelson have accomplished since last summer. They hold multiple Tag Team Titles including Future Stars of Wrestling (FSW), and Best of the West (BotW) while recently dropping the DEFY Gold to WARBEAST. One percent is the “Frankenstein” of FSW’s Joe DeFalco, and has made it look easy. Isaacs delivers suplexes and Nelson attacks from the sky. Jorel is adept at disguising his whereabouts and executing offense from multiple angles. This past year they’ve faced Killer Elite Squad (Davey Boy Smith & Lance Hoyt), The Rascalz (Zach Wentz & Dezmond Xavier), and more recently SCU (Christopher Daniels & Frankie Kazarian).
These two teams are certainly familiar with each other, but they’ve both improved significantly since the last time they faced off in December. Double Platinum is a better team now in 2019 than last year for reasons already explained. A win over Isaacs and Nelson means something and a Bay Area victory could put them into position for even higher profile Tag Team contests.