Raze vs Shotzi vs Ellie at LA Lucha's Appetite for Destruction... 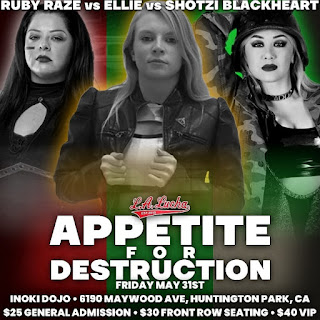 LA LUCHA returns Friday, May 31st with Appetite for Destruction at the Inoki Dojo in Huntington Park, California. BELL TIME 8PM. The Women’s Triple Threat featuring “The Equal Opportunity Ass Kicker” Ruby Raze facing Shotzi Blackheart and “The Dream Girl” Ellie. Raze is looking for revenge after losing a Triple-Threat for the Alternative Wrestling Show (AWS) Women’s Title May 18th when Shotzi won the belt from Cheerleader Melissa.
Ruby Raze is a destructive force who beat Watts in a Street Fight to make her LUCHA debut St. Patrick’s Day weekend and she’s one of the most physical and toughest stars in the sport. She isn’t afraid to face anyone including IMPACTWrestling’s Jordynne Grace, Delilah Doom (Check out their FIST Combat Deathmatch), Andy Brown, Bateman, Brody King, and Desi DeRata. Her 2019 results have been mixed with the exception of singles matches where she’s been nearly unbeatable with victories over Sandra Moone, the aforementioned Watts, and Heather Monroe. If Raze isn’t the top women’s wrestler in SoCal then you could argue it’s one of her opponents, rivals, and tag team partners…
During this past weekend, Shotzi Blackheart battled FSW Champ “The Ultimate Finesser” Chris Bey in Las Vegas this past weekend, and now looks to get back to her winning ways in Huntington Park. She recently took home the AWS Women’s Gold May 18th (Raze and Cheerleader Melissa (c)) and the SHINE Nova Title from Aja Perera in Michigan eight days earlier on May 10th. Blackheart has the energy for days and never stops moving constantly changing her offensive attack. Her versatility is her weapon as she transitions beautifully from hand strikes to wicked kicks. Blackheart uses her aerial attack with well-timed precision and takes advantage of her next-level ring awareness. We’ve seen her strategy in the past with Raze to wear her out, but she doesn’t have that luxury in this one. Blackheart and “Chingona” could turn this into a singles match by putting their young opponent out of commission...
“The Dream Girl” comes to town with a tall order attempting to outwit and outlast two of Cali’s top grapplers. Strategy can be critical to stealing a win in what may appear to be less than favorable conditions, and this young lady is very intelligent. An adept counter attacker Ellie will be well prepared for her opponents and with her size, quickness, and anonymity will be used to full advantage stay away from a Shotzi and Ruby collision and time her strikes she could certainly get her hand raised. Scramble matches are a perfect stipulation to get the upset win. Ellie is no stranger to winning big matches winning Titles in Florida with Rival Pro Wrestling.
This is sneaky, sneaky good.
Who ya got?