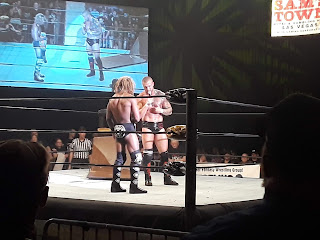 The “Ultimate Finesser” Chris Bey removed all doubts to his legitimacy and became a Living Las Vegas Legend spearing Killer Kross through a table and retaining his FSW Heavyweight Championship in the Main Event of their 10th Anniversary Show Sunday night. I spoke to Bey before the match and asked him how he felt, and he said simply, “I’ve been waiting my whole life for this. I’m tired but I’m ready.” He certainly was and took the fight to the Challenger from the opening bell. Unfortunately, an ill-advised decision to Irish whip Kross was blocked and he was unceremoniously tossed out of the wrestling ring.
Kross threw Bey around at will making multiple soft covers. They went outside the ring and the Champion grabbed a chair and that idea back-fired when Kross punched it and knocked him down. It was clear the Champ intended to be aggressive but he was bordering on overanxious and overaggressive which nearly cost him. They exchanged shots and Bey showed his toughness, but most of the time the “Ultimate Finesser” lost the exchanges. Bey was put through a table again just like he was at MECCA, but the Champion wasn’t going down. He kicked out of Doomsday which threw the Challenger into a state of shock. Kross grabbed another table and set it up in the corner.
Here’s where the Champion adjusted. He was done trying to overwhelm The Tollman and settled into 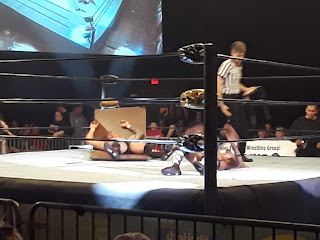 his counter-attack which is what makes him so so dangerous. He took his time and baited him. Then he seized his opportunity and gained the advantage and had the Challenger reeling. Bey hit another frog splash which his opponent kicked out of almost from instinct because he didn’t look right. He stumbled in front of the table in the corner and Bey hit the spear. Ball Game. The biggest match of his career became the biggest win of his career.

What a victory for a man who is rapidly becoming one of the great Champions in FSW history. He’s now beaten arguably the two best of all-time in Hammerstone and Killer Kross, so who could he make an IMPACT against next? He could be looking for revenge against Morrison, or with TJ Perkins, and now Austin Aries in the mix who knows. There are lots of options for the 23-year-old Superstar.