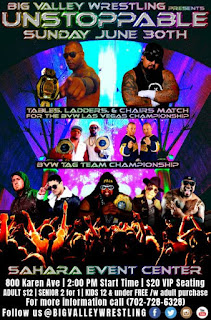 Big Valley Wrestling (BVW) announced three matches for their event UNSTOPPABLE on Sunday, June 30th and takes place at the Sahara Events Center 800 E. Karen.  BELL TIME 2PM. The Main Event features Las Vegas Champion and legend Leon Hater faces the former Champ “The Delinquent” Kevin Ducqets in a Tables, Ladders and Chairs Match in the culmination of a rivalry that has set Big Valley Wrestling on fire this year. Hater won the Title when he beat Ducqets at the Cauliflower Alley Club in a Retirement Match last April.
Santana Jackson teamed up with Indie star Joey Ryan at Downtown Neonopolis this past Thursday night and will join forces with Mikey O’ Shea and Sean Black in Six-Man Action. Jackson got the win two nights ago and he hopes to do the same at the end of the month. His trio will face Toom E. Gucci’s formidable team of Ricky Mandel who recently won Gold again in Arizona and Frank The Tank who has had a vice grip on the BVW Heavyweight Championship. This is the first time for Gucci in a Big Valley Ring and Jackson will be looking to deliver his patented Moonwalk DDT.
Speaking of Vice grips on Titles Big Valley Wrestling Tag Team Champions Fresco-Dinero (Fresco-Matic & Mondo Dinero) enter the toughest match of their career against The Ballards. Shane and Shannon Ballard are hockey style fighters and SoCal Legends who’ve competed all over the Wild West including Big Time Wrestling (BTW), Millenium Pro Wrestling (MPW), Alternative Wrestling Show (AWS), and are 3X Vendetta Pro Wrestling (VPW) Tag Team Champions. They have an unorthodox style that will be different from what the Champs are used to, but we’ve seen in the past the young grapplers are not afraid to mix it up. Big Test.
Former BVW Tag Team Champions Exceptional and Tenacious are also on the card and there is a Scramble Match for a Big Valley Wrestling contract. This continues a busy summer for BVW as they have cards scheduled Sunday, July 14th and Sunday, July 28th both at Sahara Events Center. BELL TIME 2PM.