Bonus Boyz Win Match - Get Cut at Beers and BodySlams 7 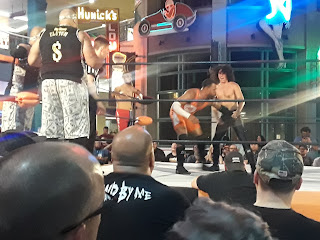 Tenacious was in rare form calling out the Bonus Boyz from the outset even insanely slapping Clutch across the face. Oooookaaaaayyy…Seriously, who slaps Clutch across the face? As usual none of their shenanigans resulted in a victory and Clutch pinned Fresco for the W with the beautiful slam he executes with such ferocity and power.

Quick note: There was a point when the only teams in the ring were the Boyz and Fresco-Dinero. That would be a quality match and a nice gauge to see where Fresco-Dinero really falls in the FSW Tag Team Division.
Unfortunately, there was someone who interrupted the well-deserved celebration. It was a hard fought win for the Boyz when things got out of hand. Two-Time FSW No Limits Champion, and Tag Champ Cut Throat Cody of The Following (w/ Bryce Harrison, Jakob Austin Young) ignited their scheduled match at FSW 10 in June by delivering a cutter to Sugar Brown of Hater Nation (w/Leon Hater, Legacy, Kenny King) after the win. He snuck through the crowd and caught Sugar mid-celebration with the move. After escaping the ring Cody yelled at Clutch from a safe distance that he would see his Tag Team partner on the 23rd when the Following take on Hater Nation to determine the greatest Faction in FSW History. The assailant ran through the growing throng of people around the ring and into the Fremont Street masses one of the cameramen at ringside yelled, “CTC!”
The Following vs Hater Nation was announced June 1st when Harrison initially interrupted Leon Hater after FSW Boss Joe DeFalco announced he would be inducted into the FSW Las Vegas Wrestling Hall of Fame June 22nd at the FSW Arena. Jakob Austin Young returned to FSW competing in April’s Limitless Tournament and the Las Vegas fans gave him a cheerful reception, but Harrison’s return was a bit cooler primarily because of who and what he interrupted. Even though the encounter ended without fisticuffs that night Cut Throat Cody sent a clear message what attitude The Following are taking into this contest and just how important it is to them.