Future Stars of Wrestling (FSW) announced yesterday that Disco Inferno is the third inductee into the FSW Las Vegas Wrestling Hall of Fame. Disco will be inducted with the late FSW SuperFan Eileen Bruno and Hater Nation tonight at 7PM at the FSW Arena.
After my stint in the Navy and an Alaska adventure, I returned to watch wrestling right around 1995 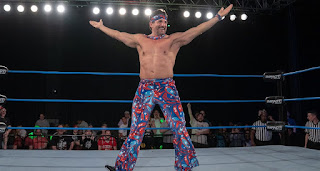 and went right back to World Championship Wrestling (WCW). When I first saw him I thought it was one of the dumbest character gimmicks ever but I figured he would job out a few times and we would never see him again. That may have been the plan but instead, it was the beginning of a career that so far has spanned three decades. He annoyed the crap out of me, and I couldn’t stand him from the first time I saw him dancing under a disco ball. Every time he would be on TV I would cringe and make some comment about how much “I hate this effing guy.” Of course, that was the WHOLE point.
You would hear his music hit and he would make his way to the ring with that smug grin on his face, but then he would grab the microphone, insist on dancing and on and on it seemed. My skin would crawl and I couldn’t wait for him to finish so he would get the shit beat out of him. I’m not sure there was anyone I enjoyed seeing lose more than Disco. He has a real talent for making you hate him and not everyone is good at that.
Disco really is a great heel but he also had a nice degree of success in the ring. He arrived in WCW in 1995 and during the early years of his career wrestled Eddie Guerrero, Chris Jericho, Dean Malenko, Randy “Macho Man” Savage and Diamond Dallas Page. In September 1997 Disco beat Alex Wright to win the WCW Television Championship on Monday Nitro and held the Title until Perry Saturn won the strap in November. He’d win the TV Title again and would also add the Cruiserweight and Tag Titles during his WCW career. He was with the company until the second to last Monday Nitro in 2001.
His FSW career began in 2009 as the first Main Event at the Silver Nugget. He has since shared the ring with Remy Marcel, Kenny King, Raven, Michael Modest, Eli Drake, and Tommy Dreamer. He returned June 13th at Beers and Bodyslams teaming with UFC Hall of Famer Stephan Bonnar in a Tag match against Joey Ryan and Santana Jackson at Downtown Neonopolis.
Despite his distaste for women’s wrestling in some ways, he’s been a pioneer. In October of 1997, he wrestled Jacqueline in what was billed as a “Man vs Woman” Match here in Las Vegas at Halloween  Havoc. 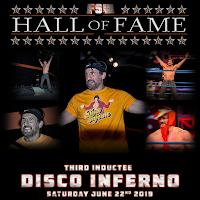 The intergender match was uncommon then but Disco has made a name for himself recently in facing the likes of Scarlett Bordeaux, Ashley Vox and Tessa Blanchard on IMPACTWrestling. FSW Boss Joe DeFalco said that “Disco is the most hated wrestler in Las Vegas” when I posed the question recently and that could well be accurate since he might be the most hated man on IMPACTWrestling too only part-time. Disco has had a major part in the training of several of FSW’s top stars including Killer Kross and Chris Bey who are in the Main Event tomorrow night. He also co-hosts a podcast with Konnan called Keepin it 100 and his brutal honesty is refreshing even if he still finds a way to get under your skin. I never thought I would see Disco Inferno and Hall of Fame in the same sentence, but we do, and it’s deserved. Congratulations Disco.