Exciting news for the Vegas Wrestling scene yesterday as the United Wrestling Network (UWN) made official what we discussed last week is they are starting a brand new promotion here in Las Vegas called Silver State Wrestling. UWN did not reveal anything other than to announce the 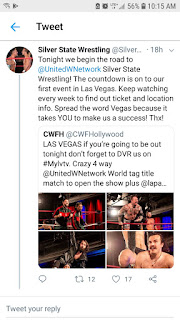 future event and the debut of Championship Wrestling from Hollywood (CWFH) last night on MyLVTV was the beginning of the countdown.

All indications are that UWN Owner David Marquez is very serious about the Las Vegas endeavor as he’s reportedly hired separate producers for the Silver State show. They’re still planning on Championship Wrestling from Louisiana and hope to have Las Vegas and Louisiana up and running with the current brands CWFH and Championship Wrestling from Arizona (CWFA) in 2020. If Championship Wrestling from Memphis continues to succeed we could see one in Tennessee too. The Memphis show is first class with a professional production so we should expect no different here.
UWN didn’t announce a location for the premier event and have not reached out to book at the FSW Arena which has been popular more of late as promoters and wanna be promoters are beginning to tap into the talented and hungry Las Vegas wrestling market.  Marquez has ties to the Orleans Arena from his TNA days, but CWFH and CWFA compete in front of smaller houses. Las Vegas is home to many venues similar in size to the Nile Theater in Arizona and the Oceanview Pavilion in SoCal. That leaves options downtown with bars and hotels always looking for entertainment.
Several of the Top Stars in CWFH and CWFA regularly compete with FSW like Chris Bey, Damian Drake, Royce Isaacs, Shaggy McLovin, and Adriel Noctis. With AEW last month and now this it's a great time to be a wrestling fan in Las Vegas.