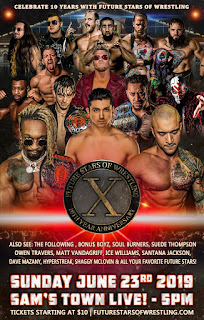 We've been waiting for this folks, FSW10 Week is here. We're now less than seven days away from the biggest event in FSW's history at Sam's Town Live the home of Pro Wrestling in Las Vegas. FSW10 is just the event on Sunday night. The card will be preceded the night before because on Saturday, June 22nd at the FSW Arena will be the FSW Las Vegas Wrestling Hall of Fame Ceremony. Tickets are only $20 and there won’t be a dry eye in the place as FSW SuperFan Eileen Bruno will be posthumously inducted along with Hater Nation. There will be food and drinks at what should be a very special evening.

Still no word yet on the final entrant for FSW 10's Cash in the Case Match. The stakes are even higher this year as the winner can Cash it in for a shot at  ANY FSW Title. We won't have a repeat winner because last years Mr. Cash in the Case Greg Romero is competing in a Triple-Threat (vs Damian Drake & Nick Bugatti) for the No Limits Title.


Hammerstone took to video and continued to disparage FSW Nevada State Champion Sefa Fatu using Jack Daniels and Coke. He mixed a “Jack and Coke” drink with water to imply that Fatu is not the real thing and is a watered-down version of his family that includes his Father Rikishi, Brothers Jimmy and Jay Uso, The Rock and Roman Reigns. Your boy Hammer and “The Problem” are scheduled for a Last Man Standing Match at FSW 10 in a rematch of their classic at MECCA IV. From the moment “The Business” challenged Fatu for the Blue Belt he has attacked his lineage and Sefa in particular. Now Hammerstone will have the chance to back up his bold words next Sunday at Sam’s Town Live.