The King of "Dong Style" Joey Ryan teamed up with Santana Jackson last night to defeat Disco Inferno and UFC Hall of Famer Stephon Bonner. Ryan stuck his blow pop in Inferno's mouth and delivered a perfect Superkick to get the pin. A good crowd walked up on a hot Vegas evening. If it was hot for us I can't imagine how hot it was for the wrestlers. Despite this, it was a fun show with several good matches.

Matt Vandagriff qualified for the Cash in the Case Ladder Match at FSW 10 by defeating Kyle Hawk last night. The match began with chain wrestling and both drew rounds of applause from the fans in attendance. It was back and forth as the “Flip Artist” was able to lure Hawk into attempting aerial moves instead of trying to stay on the ground where he has an advantage.  Vandagriff is astute at this and being able to turn the pace up helped lead to his victory. Now the question is will FSW 10 be the big moment for him. He’s had multiple opportunities which we’ve documented here, and his FSW run in 2019 has largely been successful. Now he has another high profile match and this time you could argue he’s the favorite. It’s a ladder match and that certainly appeals to Matt’s advantage in the air and the young man is certainly due for a marquee win in FSW. Will the 10th Anniversary be that moment? 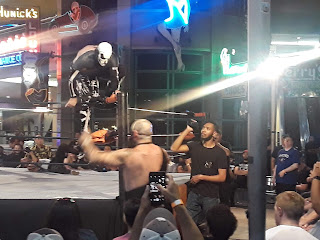 SINN Bodhi retained his OVW Anarchy Championship when he pinned Ice Williams and also got the right to choose the stipulation for his previously announced match at FSW 10 against The DEMIGOD of DEATH Funny Bone. Not surprisingly Bone was the surprise opponent for Bodhi in the Four-Way with WIlliams, and Remy Marcel, but the Warlord of Weird was having none of it even threatening to leave and not compete. However, Funny Bone gave him the option to choose the stipulation if he remained. This match is a result of Bodhi pushing the DEMIGOD off the turnbuckle at MECCA IV resulting in Nick Gage getting the win. What kind of match should we expect at FSW 10?
Suede Thompson came out and acknowledged the dirty little secret in the room that he hasn’t won in FSW since 2018. By his count last night he was at 13, and then he called out No Limits Champion Damian Drake and lost again. It’s now 14 straight and at this point, Suede has no opponent for the biggest show in FSW’s history. It could be easy to pile on Thompson, but he hasn’t had an easy road. His list of defeats include Shogun Jones, Matt Vandagriff, Eli Everfly, Andy Brown, and his best friend FSW Heavyweight Champion Chris Bey. Suede also is an entrepreneur, and he’s been an FSW Show producer, so he's clearly had potential distractions.
Fun Fact: Not sure a show has run on time since he produced one a few months ago. Keep your head up Suede.
Speaking of no opponent for FSW 10 Shogun Jones arrived during the opening match and cleared the ring. He finished with nearly throwing Shade through it but he escaped after Greg Romero tried to attack Jones from behind. Cash in the Case Match for Shogun...maybe? If I was Champ I’d hate to see him win it. 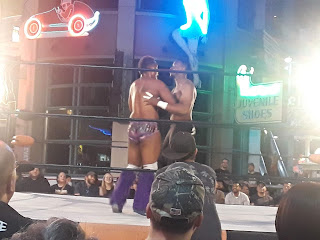 FSW Heavyweight Champion Chris Bey looked sharp and fought off an inspired performance by the rapidly improving Shaggy McLovin. The Skatepark Scumbag has been more aggressive which showcases his toughness. Neither man was there to smile and carry on with the fans as we’ve noted in the FSW Champ’s behavior since the Killer Kross announcement and it was no different last night. Bey got the victory and I swear the “Ultimate Finesser” has at least five moves he can end a match with. You literally never know when he will finish the fight. The question now, Is Kross ready for Bey?
Douglas James got a tough win over Hyperstreak ending his run of victories. I spoke to James shortly after the match and said he feels great and is ready for TJ Perkins on the 23rd.