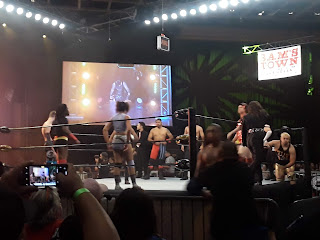 Suede Thompson got back in the Future Stars of Wrestling (FSW) win column at a sold-out Sam’s Town Live winning the Nick Bockwinkel Memorial Battle Royal at the FSW 10th Anniversary Show last night. Thompson eliminated Gabriel Gallo to get the victory and erase any doubts whether there was Suederade left in the tank. We got the answer loud and clear and I don’t mean those “wrestling trunks” he wore to the ring. It was a quality win in a match that featured young stars like Shaggy McLovin, Hero Lu, WATSON, Sandra Moone, C-Lassic, Macho Mouse, Mondo Rox, and tag team Fresco-Dinero (Fresco-Matic & Mondo Dinero).

Once again when it mattered most the “New Age Daredevil” Damian Drake lived victoriously defeating Nick Bugatti and Greg Romero to retain the FSW No Limits Championship. As expected the match was wild and crazy but came full circle in the end. As expected Mazzerati got involved sliding a chair in the ring, but Drake stopped it and chin-checked her with a perfect throw knocking her off the ring apron to the floor. One triangle averted, but another on the horizon. Douglas James and TJ Perkins fought to a Time Limit draw and both are top contenders for the No Limits Championship. If those two have a rematch the winner would walk into a Title shot.
Graves won the Cash in the Case, but that was just the beginning. He turned on Sefa Fatu and helped his new old friend Hammerstone win the Nevada State Title. Later on, he cashed in the briefcase with “The Business” and they took down Tag Champions One Percent (Royce Isaacs & Jorel Nelson) who had just seemingly retained against The Soul Burners. The Gods of War have returned to FSW and now have the Tag Team Titles. With Gallo in the mix, we could be looking at a very enticing Six-Man with Sefa and 1% taking on last night's Arizona Wrecking Crew. Sefa Fatu and One Percent lost nothing dropping the belts. They were completely blind-sided in both cases and will certainly have a rematch at some point. 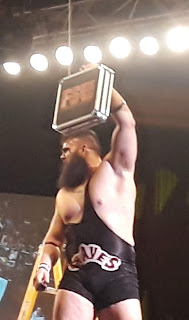 The popular Death Match item the Staple Gun was put to good use in Funny Bone and Sinn Bodhi’s Heaven and Hell Match. I was admittedly lukewarm on this one and completely wrong. I enjoyed it very much and I think it was the best match of the night. Legos, tacks, guardrails, and a casket were
all part of this war. Funny Bone even stapled his photo to Bodhi’s head and then signed it getting a big pop. Bone got the win and we want to also congratulate him on his new documentary called – I AM Funny Bone.

The "Ultimate Finesser" Chris Bey stopped the clock and defeated Killer Kross clean and got the biggest win of his career. Bey continues his stranglehold on the FSW Heavyweight Championship and his star in Vegas may not be brighter. After the match, Kross was speaking was interrupted when Austin Aries returned. Aries was eventually joined by former UFC fighter and submission master Frank Mir. They announced that Mir would be part of Natural Born Killers on July 5th.
The Following (Cut Throat Cody & Jakob Austin Young) beat newly inducted into the FSW Las Vegas Wrestling Hall of Fame Hater Nation (Leon Hater, Legacy, Sugar Brown) after Cut Throat Cody made Legacy tap. They got one of the biggest pops of the show.
Shogun Jones beat Kenny King by Countout. I would like to see that one done again. I honestly don't think Kenny King would ever get booed in Las Vegas no matter how big a heel he is elsewhere.