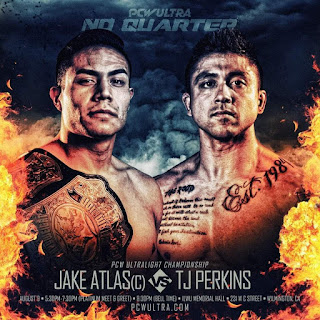 PCW ULTRA announced today that “Superstar” Jake Atlas will defend his Ultra Light Championship August 9th against TJ Perkins at No Quarter at the ILWU Memorial Hall or the ULTRAtorium for the converted. BELL TIME 8:30PM. Atlas is coming off his victory at Mind Crawler against Trey Miguel and a win over Perkins would be career-defining to this point.
Atlas is the top Cruiserweight in SoCal and with wins over Dezmond Xavier at WrestleSummit and now Miguel sealed it for now, but Perkins has been very impressive in his return to the Indie ranks this month. He beat Aussie Adam Brooks last time in Wilmington and had a tough Time-Limit draw with ULTRA fav “Relentless” Douglas James on Sunday here in Las Vegas. There were no signs of rust as Perkins looked better than ever and he will need to because nobody has been hotter than the “Superstar.”
If anyone is going to beat him then the former WWE Cruiserweight Champion is a likely candidate, but that’s easier said than done. His height and athleticism make Atlas a match-up nightmare at Cruiserweight and utilizes his reach advantage with vicious aggression. He’s one of the best strikers in the Wild West and can stand and trade with anyone in the division. Atlas may want to turn this into a slugfest to stay out of the traps Perkins loves to set for his submissions on the mat. This match is a Main Event anywhere.
"The Baddest Mother F***er in Professional Wrestling" SCHAFF returns to ULTRA after getting a victory in a Four Man Scramble at Mind Crawler as does Brian Pillman Jr. who also picked up a win in his debut. Matt Sydal is on the card and was scheduled to face former ULTRA Champion Shane Strickland earlier this year but was forced to bow out due to injury. Talented cat. Maybe he gets his Title shot against ULTRA King Mil Muertes who beat Swerve to win the Gold at WrestleSummit in April and took down Sami Callihan last time out. Any of those three would be dangerous opponents for Muertes. ULTRA and DEFY Tag Champs WARBEAST (Almighty Sheikh & Jacob Fatu) and ULTRA Women’s Champion Tessa Blanchard is also scheduled.
If you haven’t made the trip to the Long Beach area for an ULTRA show I highly recommend. One of the best shows I’ve been to this year. The crowd is passionate, committed and has a ton of energy from the first bell to the last. Great place to watch wrestling.