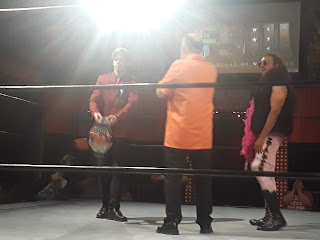 The top of the No Limits division has been crazy to say the least. Champion Damian Drake has been locked in a struggle with Greg Romero and Nick Bugatti to retain his Title, but has the chance to close the deal tonight in a Triple-Threat. A Steel Chair has been the centerpiece of this wild No Limits feud as all three competitors has used one at some point or another. The hate is real in this one and here’s a breakdown of tonight’s No Limits Title Match at the Future Stars of Wrestling (FSW) 10th Anniversary Show tonight at Sam's Town Live. BELL TIME 5PM.

Nick Bugatti has the toughest hill to climb in this one. He likes to slow the pace down and work on specific body parts. He won’t have that option here may rely on the “assistance” of Mazzerati who may be at ringside. If she slithers into Sam’s Town Live she’ll be part of the plan and is certainly willing and able. Anytime Mazzerati is in the building she has to be accounted for. "The Italian Flamingo" has been inches away from the No Limits Belt and if Romero hadn’t interfered once and refused to count the pin in another he’d likely be Champion again.

Greg Romero has kicked up a lot of dust since he got involved in Daredevil business at Against All Odds Rumble back in December of 2018, and the chair throw that took out Drake started a chain reaction leading to tonight. Since then all we’ve seen is dust. Romero wasn’t able to beat Bugatti either, and the Champ came wielding the steel chair taking out both of them in the Number One Contender Match. However, he got the pin at Beers and Bodyslams in an 8 Man Tag and looked really comfortable even chasing Shogun Jones out of the ring after the contest. It’s not easy to look good against Bugatti in singles to be fair, but this is a scramble and Romero likes to create space which makes him even more dangerous with this stipulation.

Damian Drake got the win at MECCA IV pinning Trey Miguel but lost in the Limitless Tournament Final to Douglas James leading pundits to speculate that DJ is really at the top of the division now. However, Drake has beaten Shaggy McLovin, Suede Thompson, Jake Atlas, and Matt Vandagriff during his reign, and the aforementioned Scramble. He’s had multiple opportunities to finish Bugatti and has been unable to do so as the Italian Flamingo has been successful at grounding the “New Age Daredevil.” This style of match sets up perfectly for the Champion though where he can use his speed and open up the offense for his deadly aerial attack. It's the best scenario for Drake with this stipulation and look for him to deliver again on the Sam's Town Live stage.