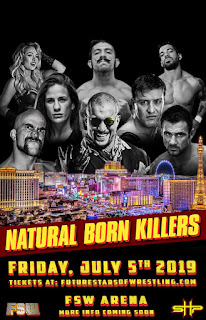 Future Stars of Wrestling (FSW) and Super Heel Promotions announced that none other than former WWE, and current Major League Wrestling (MLW) star Simon Gotch will compete on Natural Born Killers July 5th. Gotch has been confirmed with Killer Kross, Scarlett Bourdeaux, Dave "Pain Train" Mazany, Gina "Danger" Mazany, "American Psycho" Stephan Bonnar, "New York Bad Ass" Phil Baroni, and also added last night "Relentless" Douglas James. This is the FSW debut for Gotch who was best known in WWE as one-half of the Vaudevillains with Aiden English where they won NXT Tag Titles prior to his call-up and before going North they would lose the belts to The Revival (Dash Wilder & Scott Dawson). The team arrived in WWE with much fanfare but it was not followed by in-ring success, and Gotch ultimately left the company.
Prior to his time with WWE Gotch was a long-time grinder on the Indie scene beginning in Northern California with All Pro Wrestling (APW) and eventually the Empire Wrestling Federation (EWF), Pro Wrestling Guerrilla (PWG), Game Changer Wrestling (GCW), and World League Wrestling (WLW) competing primarily as Ryan Drago until he arrived in New York. He trained with NWA Legend Harley Race and you can certainly see the similarities in style. Gotch also likes a slow meticulous pace and takes his time to execute each move with the utmost efficiency. Simon wears down opponents and will bend the rules when necessary.
When Gotch returned to the Indie circuit he competed in Chikara’s King of Trios with The Throwbacks (Dasher Hatfield & Mark Angelosetti). They beat The Anti-Fun Police (Chief Deputy Dunne, Jim Obstruction & Leigh Obstruction) and lost in the Quarterfinals to British Strong Style (Pete Dunne, Tyler Bate & Trent Seven). Gotch made his Ring of Honor (ROH) debut and got a shot at the ROH Television Title against “The Last Real Man” Silas Young but came up short.
His time with MLW has revealed a darker side than anything we saw in WWE. First he turned on Tom Lawlor and “Team Filthy” and since teaming with (Jacob Fatu & Josef Samael) as Contra Unit they’ve used steel stakes, thrown flames in faces, and attempted to set others on fire. He even shaved his trademark handlebar mustache. That aside Gotch is a very capable in-ring competitor. During Wrestlemania week he competed with GCW at Josh Barnett’s Bloodsport event against the monster J.R. Kratos in a losing effort.

Here is my Indie Watch and interview with Douglas James in May. https://lastwordonprowrestling.com/2019/05/10/indie-watch-renewed-restored-relentless-douglas-james/