What's Next for Sefa Fatu...A Trilogy?

“The Problem” Sefa Fatu was beaten by three men Sunday night at Sam’s Town Live and it cost him the Nevada State Championship. He’s made it clear he intends to get the Blue Belt back but he knows now what is in store for him going forward. Fatu thought he had an ally in former Champ Graves and we witnessed Sunday night that he’s the furthest thing from. It was a classic swerve double-cross that still has some Future Stars of Wrestling (FSW) faithful trying to figure out their lives. Now “The Problem” is going to need friends soon because Hammerstone is difficult enough to beat by himself so with the rest of this Arizona wrecking crew in place, he’s nearly unstoppable.
He likely will find committed allies in former FSW Tag Team Champions One Percent (Royce Isaacs & Jorel Nelson) who are still trying to find the truck that hit them roughly 48 Hours ago and left with the Belts. We may get a Six-Man Match as Gabriel Gallo would team with the reunited and new FSW Tag Champs the Gods of War (Graves & Hammerstone). While the Two-Time Tag Champs are excellent they have an agenda too in trying to get their own Gold back. Fatu endured plenty of insults from Hammerstone going into the match Sunday and it has to still be eating at him that he didn’t close the deal. There were obviously circumstances beyond his control, but it doesn’t change the fact there is a new Nevada State Champion.
Fatu is scheduled to compete this weekend for the Title in the Arizona Wrestling Federation (AWF) and won their Wildcard Rumble June 1st to earn the shot and has a great chance to soften the sting of losing the Blue Belt. In fact, Hammer is in the match along with AWF King WATSON, so Fatu gets 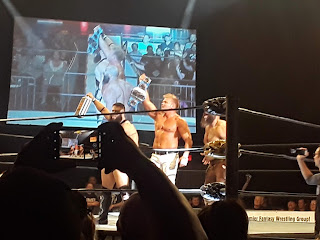 his hands on him pronto. However, the Nevada Gold was the first in his home promotion. His Dad and many members of his family were at Sam’s Town when he won the belt in January, so the importance of regaining that Championship cannot be understated. That aside he has had two excellent matches with “The Business” and you could argue he had him beaten in both times. It was more egregious Sunday night since Gallo literally came to the ring and helped up his buddy before the ten count. We’re not used to seeing Hammerstone require this much teamwork, but it’s obvious that despite his words he understands just how dangerous the Son of Rikishi truly is since it took three men to take the Title away.

A rematch with Hammerstone is a massive Main Event and would the third fight in a trilogy that has yet to see a clean win. That’s part of what’s made it so compelling and why I believe it’s been the feud of the year in FSW. How will the young star respond to this adversity? Well, if it’s anything like the rest of the Samoan Dynasty it won’t be long until we call Sefa Fatu a two-time Nevada State Champ.