Editors Note: Shaggy McLovin was originally on this list and he is not a rookie. He was replaced by Macho Mouse.

As the smoke clears from FSW10 we are at the halfway point of the wrestling year. The young talent in Las Vegas is plentiful with two standout rookies and a few that are just waiting for them to slip. We examined some of the top rookies to see who to watch for the rest of 2019. In fact, there are some intriguing matches within this group that would be great to see. Who’s the top FSW rookie up to this point?

Ice Williams
You might be surprised to see Ice Williams on this list of rookies and so am I. However, when I got confirmation from FSW on who qualified as a rookie Ice is one of them. It’s also possible he isn’t one but I listed him anyway if for any other reason than his awesome entrance at FSW10. I digress. He has qualified for the No Limits Scramble, Limitless Tournament, and Cash in the Case. His naysayers will point out that he didn’t win any of those, but it’s not as easy as some people may think to even get into those matches. Obviously, there were reasons some didn’t compete in all three but Ice, Matt Vandagriff, and Owen Travers is the only 3 who were in each. Williams has tons of promise from his personality, talent and his pure enjoyment to be in front of a crowd. Ice Williams is the clear front runner as Top Rookie.

Hero Lu
What’s not to love about this young rookie? He has the whole package to be a force in FSW very soon. The strength is there and he matches up with any heavyweights physically. It would be good to see him in some Openweight matches to see how he handles guys with more speed and quickness. There were rumors he was going to face FSW Champ, Chris Bey, a few weeks ago and that would have clearly been a good indicator. Lu has a presence and confidence that was on display in tough matches this year against Shogun Jones and new Nevada State Champion Hammerstone and picked up his first win in the Arena against the next rookie on the list…

Fresco-Mattic
Fresco has the size, look, and a sound microphone game already. He has begun booking regularly with FSW and the success will come as his experience grows. The height is legit which creates tons of mismatches and as he gets bigger and stronger it will be interesting to see where his development goes. His team with Mondo Dinero (Fresco-Dinero) won Tag Gold in Big Valley Wrestling (BVW) and are working together more in FSW. They were part of a high profile Four Way Tag match at Beers and Bodyslams acquitting themselves quite well, and we’ve already made our feelings known about them facing Bonus Boyz (Clutch Kucera & Sugar Brown).

Mondo Rox
One of the most exciting and popular rookies in Las Vegas is Mondo Rox. The youngster from Albuquerque has a strong fan base and this kid loves every second of the attention. His ring work is solid and he qualified by winning a Four Way for the Limitless Tournament where he lost in Round 1 to No Limits Champion Damian Drake. Rox draws a lot of energy from the fans and looks to them for support throughout his matches. Mondo is usually booked in large tags or Scrambles in FSW so it would nice to see him against other No Limits contenders like Shaggy or Ice to see where his game is. This young man has a bright future in the No Limits division. 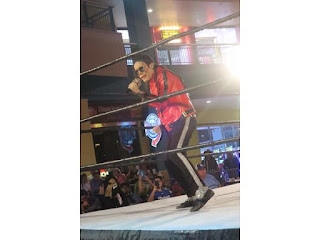 Santana Jackson
The star of MJ LIVE recently teamed with the “King of Dong Style” Joey Ryan at Beers And Bodyslams, and was in the Nick Bockwinkel Memorial Battle Royal. Jackson paired with “Pain Train” Mazany at the FSW Arena, but we haven’t seen him one on one with No Limits competitors the likes of Ice, Shaggy, or Mondo. We don’t know if Jackson is going to be an eventual Title contender with improvement or more of a special attraction.


Macho Mouse
I added the MOST Macho Mouse after I removed Shaggy McLovin since we were notified he is not a rookie. The first time I got a glimpse I thought he was silly, but I've grown to be quite entertained by the young rookie. He delivers the elbow from the top effectively and is over with the Las Vegas fan base. Similar to Mondo Rox he wrestles in scrambles and tag matches so an opportunity in singles for him would be nice to see where his development is. Anyone on this list would be a quality upgrade in competition for him, but just like Santana Jackson we don't know yet if he is going to be a legitimate Title contender or a unique entertaining gimmick. Macho has the size and skill to give other young FSW stars problems if he starts to climb the rankings.