Who are the Top Heels in Las Vegas?

I was listening to Disco Inferno on You Tube and he said (About being a heel) that the environment today is “easy to heel in because everyone wants to be a Babyface….everyone wants to be loved.” You may not always agree with Disco but he makes a valid point. Even wrestlers that are supposed to be heels wind up as a face. What makes a good heel? There are multiple opinions on what makes a good heel or whether or not they even have them anymore.
A heel should rarely or never get cheered. Nothing in his ring game or promo work should elicit a positive response from the crowd. The heel is supposed to punish the babyface and the last thing we should be doing is cheering them while they do it. It’s hard to boo someone when your screaming, “Holy S**t.” We should be angry at the heel and definitely not supporting them. However, these days there are very few real heels. MJF, Kevin Owens, The Miz (I know), and David Starr are “bad guys” that push the envelope and draw good heat. One of my colleagues in Ireland said about David Starr, “He breathes, we boo him.” Thanks, David.
Who are the top heels in Las Vegas today? Here’s my list of Top Heels in Southern Nevada:
Exceptional & Tenacious (Alexander Braven & Ricky Triforce Tenacious) are at the top of this list. They turned One Percent face in just one match or the FSW Tag Team Champions may have been on this list. “Exceptional” Alexander  Braven is the perfect partner for someone who tends to dominate the spotlight. Braven really believes he’s “Exceptional” but he’s the hapless guy most times and manages to draw his own level of angst from the crowd whether it’s Future Stars of Wrestling (FSW) or Big Valley Wrestling (BVW) where they were Tag Team Champions for nearly a year. While Vegas fans may dislike “Exceptional” Alexander Braven they “freakin” loathe Ricky Triforce Tenacious. When Tenacious walks down the ramp in his fantastic black “Elvis” gear and clears his throat you can feel the agony in the crowd. What is it? A song? A poem? It doesn’t matter because rain down on the pair and they fan the flames the entire time. Triforce is improving in the ring and has high-quality promo skills. He keeps getting better. 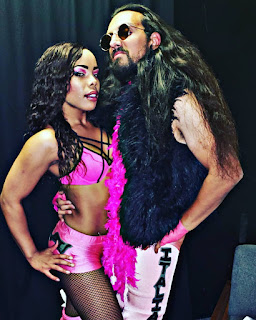 Nick Bugatti and Mazzerati are a close second. They are a very talented pair who generate strong responses from the crowd without saying anything. Their punishing wrestling style is what draws the ire of the Vegas fans by harassing their opponents and the fans with verbal assaults. Bugatti’s feud with Damian Drake and Greg Romero has been one of the two best FSW Feuds in 2019 (Sefa vs Hammer). Mazzerati is unpleasant and makes her feelings known immediately. She makes an L with her thumb and forefinger and after she made a little girl cry she started laughing at her. A real peach.
Kevin Ducqets – The former BVW Las Vegas Champion doesn’t really like anybody and doesn’t care if you like him. He probably prefers you don’t. He feuds with one of the most popular wrestlers in Las Vegas, Leon Hater doesn’t help. He made Hater’s life miserable in Big Valley before dropping the belt in April. His promos are some of the best in BVW and he’s their Top Heel (Not named Exceptional & Tenacious).
MK – The most hated manager in Las Vegas. He manages the new babyface FSW Tag Champions One Percent and he still gets booed. MK is tough and takes heavy bumps all the time. The dive he “absorbed” from Luster the Legend was incredible. If it’s not his sunglasses or his four-finger HEEL ring the fans can’t stand the sight of him. That’s before he starts talking and they just boo him more.
Kyle Hawk’s catchphrase “Suck my tomahawk” has brought him boos from wrestling fans all over Las Vegas. He refers to fans as “Pale Face” and stirs the political stew making references to the mistreatment of Native Americans. I spoke to him at the merch table and he was just as unfriendly there. When I told him he was good he said, “Ya I know.” Kyle Hawk is one of my favorites and a wonderful ray of sunshine.
I sung Shogun Jones' praises yesterday and believe he is a future star. And of course Hammerstone. You didn’t honestly think this FanBoy forgot about “The Business” did you? Your boy Hammer is already one of the best in the game and truly gets his responsibility in that capacity. He’s on another level.

Who do you think are the Top Heels in Las Vegas right now?