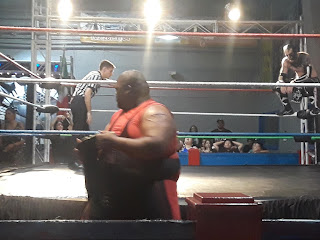 In front of a standing-room-only crowd in the sweltering Sahara Event Center Frank The Tank retained his Big Valley Wrestling (BVW) Championship by disqualification over Funny Bone and Kevin Ducqets beat Sean Black with a little help from his friend. Bobby Beamer and Congo Crush want a Title shot and no BVW contract was awarded.
There was the talk of a rematch minutes after Frank The Tank was properly awarded the Disqualification victory over the DEMIGOD of Death Funny Bone after he dove onto referee Cody outside the ring. However, it looked like Bone may take the belt away from Fat and Furious when Referee Ben (Not that one) stormed the ring to replace Cody. When it looked as if Funny was going to finish it Cody stumbled into the ring and waved off the contest. Unfortunately for Cody Funny Bone didn’t think it was a proper DQ and promptly delivered a low-blow and a Double-Stomp for good measure. Fans heckled the poor ref as he was helped up the ramp. No word from BVW El Jefe Benny Espinosa if a suspension will be handed down.
“The Delinquent” and Still Las Vegas Champion Kevin Ducqets retained his Title with a hard-fought Sergeant Major returned and provided assistance by decimating Sean Black. It was No-Disqualification so anyone can help and it happened right in front of the assigned official. If Major is providing cover for Ducqets he should keep the Las Vegas Strap around his waist for the foreseeable future. 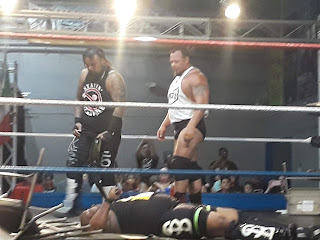 win against Sean Black in a bout that stretched into the SEC roller hockey rink. After both athletes checked each other into the boards Ducqets found it necessary to punch-out an unsuspecting wrestling student. The poor kid was still holding his jaw well after the confrontation. It reminded me of another young kid who got Super-Kicked by Pentagon Jr. at last February’s IMPACT show. Ducqets wore Leon Hater’s shirt to the ring this afternoon and said on Tommy Purr’s show he respected Leon. Amends?

The Manager of the BVW Tag Team Champions Primo Pulpo looked calm and relaxed before the show even joking around with a young fan prior to the opening bell. He had good reason to be
confident as Fresco-Dinero (Fresco-Mattic & Mondo Dinero) left no doubts who the Big Dogs were in the Big Valley. They Cut In Half Mondo Rox and got the pin in the Tag Team Triple Threat Match. The win earned them the right to compete in the Sin City Survival Match where the winner gets a Title shot at any BVW Title. Would both men go after a singles belt or do they want to ensure nobody tries anything shady to steal their Titles. Huge Advantage. 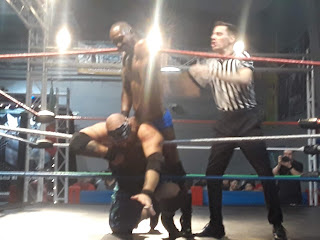 "Exceptional" Alexander Braven & Ricky Triforce "Tenacious" lost again and unfortunately, nobody cares about Braven. The former Champs continue to avoid the winners pay window like Tenacious avoided singing lessons. They’ve been far from the best around and will need to do some soul searching if they want to get back to the Top Spot. Did I say Top Gun? Nope I said Sky High (Mondo Rox & Robbie Lit), who had their chances in this one and will be a force to reckon with the remainder of 2019. The brother’s looked more cohesive this time out, and as Robbie gets more comfortable lookout. Lit was holding his shoulder when he left went up the ramp so hopefully, it’s just a standard ring knock.
Big Dirty took out Reckless “R.L.” Washington to earn the other spot in the Sin City Survival Match at the SEC Labor Day Weekend. Dirty showed off some rather skillful grappling technique against Washington which took the youngster by surprise. Dirty’s name fits and he likes to make his bouts physical and stiff, but he slowed this one down keeping his opponents on the mat. It was a very intelligent gameplan against a wrestler who’s offense is generated by moving and creating space. There was none of that and Big Dirty picked up the W.
Congo Crush was dominant again this afternoon getting his hand raised again in Las Vegas. Crush 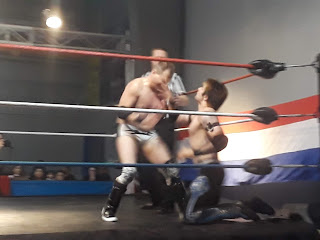 had a few more issues with his opponent Xavier, but nothing that Bobby Beamer can’t iron out. The fans chanted “Title Shot” as the “Killa of Godzilla” went up the ramp. With Beamer at ringside Congo Crush is a threat to any of the singles Championships and there are plenty of options for the man from Parts Unknown such as Big Dirty and Sean Black.

“The High Flying Sensation” Steven Andrews and “Charming” Biagio Crescenzo pinned each other and for the second consecutive time they both “won.” So El Jefe quickly responded and said they’ll settle it (hopefully) September 1st at the Biggest and the Baddest in a Best of Three Falls Match. Crescenzo immediately attacked Andrews before the bell rang and it was a wild affair from that point on. These two match up so it could take hours to get a winner. Whoever gets the contract will have certainly earned it.
Captain Buggy picked up a victory over Bad Boy Brady, and the Luchadores were dynamic as always. It was a great show this afternoon despite the fact it was hot. I’m not saying it was “Africa Hot,” but it was close Matthew.