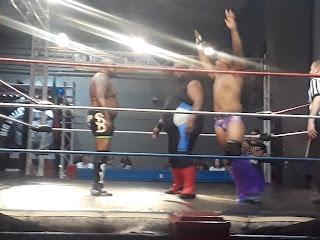 Big Valley Wrestling (BVW) Heavyweight Champion Frank the Tank retained his BVW Title Sunday afternoon after an F5 on Da Shade and the resulting pinfall. Da Shade you ask? The match was scheduled to be Frank and Sean Black, however, earlier in the card the Champ came to the ring and called out the most well-known thrower of Shade in Southern Nevada. Shade was added to the Championship match and it was turned into a Triple-Threat.
The match was all over the place and with Sean Black outside the ring, Kevin Ducqets got revenge on an unprovoked attack by Black earlier on the card. Ducqets successfully defended his Las Vegas Championship over Tommy Purr who challenged his manhood following their interview. BVW Commissioner Rocky T was scheduled to appear but there was a change of plans unbeknownst to Purr. After the contest, Sean Black stormed the ring and attempted to take out the Champion. This proved a mistake as Ducqets 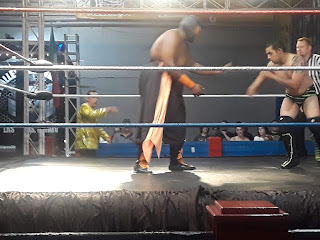 was quick to capitalize and even the score. It’s easy to see the Big Valley Championship Committee putting this one together in the future. July 28th?

With Black out of commission, Frank took control and got the victory. After he dispatched Da Shade the announcement was made that Frank the Tank will defend the Big Valley Gold against the DEMIGOD of DEATH Funny Bone on July 28th. This just got a lot tougher for the Champion. Bone creates a million matchup problems with his versatility and toughness.
Prior to the announcement, it looked like Big Dirty could be next for Frank but to no avail and he may have been left out of both Title pictures so what about Congo Crush? Bobby Bemer’s new “wrestler” made his presence known with the demolition of Bad Boy Brady in his Big Valley debut. Crush had no trouble with his smaller opponent and Big Dirty would be a major step up in competition for him. Let’s see if Bobby Bemer is willing to put his new man in against someone of Dirty’s caliber. Big Dirty collected a win over Captain Buggy in a bout that was tougher than expected. The pirate clown was able to keep his larger on the mat taking his leverage away. However, it wasn’t enough as the Big Valley stalwart prevailed.

Sky High (Robbie Lit & Mondo Roxx) and former BVW Tag Team Champions Exceptional and Tenacious battled to a double-count out. Nothing was resolved in this highly competitive contest. E & T wants to continue to prove they're “The Best around” using crisp well-executed double-teams to wear down the recently returning Lit. They kept him in the corner tagging in and out cutting the ring off. Once Roxx was tagged in the melee continued until all four men were outside the ring and the double count-out was the result. The BVW Tag Team Champs Fresco-Dinero (Fresco-Mattic & Mondo Dinero) came to the ring again after a Six-Man win (w/Santana Jackson) earlier and attacked Exceptional and Tenacious. It doesn’t look like Fresco-Dinero has interest in E & T and openly challenged Sky High. That’s a great bout, and hopefully, the young Aviation brothers work out the kinks before a potential Championship match. If they do…