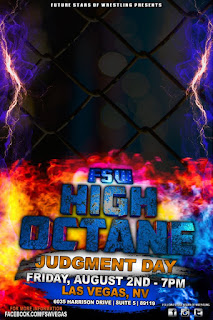 First, it’s great to hear that Future Stars of Wrestling (FSW) Boss Joe DeFalco is back home and I’m positive will be at the FSW Arena Friday for the go-home show before Survival of the Fittest August 17th at Sam’s Town Live. He’s never missed one in Ten Years at the Helm so don’t expect that to change. It would be the Upset of the Year. Don’t bet on it. Beat it Cal.
FSW confirmed three matches have been signed for Friday Night’s Edition of High Octane at the FSW Arena. BELL TIME 7PM. Ice Williams will get his chance at revenge against the shovel wielding, "New York Legend" Remy Marcel, MMA Star Kyra Batara will face the Evil Vixen Mazzerati and Kyle Hawk battles Greg Romero.
After his near victory against the No Limits Champion Damian Drake the “self-proclaimed” No Limits Champ steps into the ring against the man that whacked both with a shovel two weeks ago. Ice Williams was irate on Social Media calling for Marcel’s head in a video tirade soon after the attack. It was his first one-on-one shot against Drake for the Gold and as The FSW Boss put it, “Remy Marcel ruined everything.” Now Marcel is one win away from that No Limits Title shot as no action was taken by the FSW brass. Will Ice be able to keep his head together, stay calm, and get the win? It’s hard to bet against the talented rookie, and don’t forget about Slime E. oops Sal E. who really is a difference-maker at ringside. What will Damian Drake have to say about all this? Regardless, the Daredevil has had one hell of a title reign.
The FSW Women’s division has gotten a big boost with the recent return of Mazzerati who faces FSW newcomer and MMA Star Kyra “Mogwai” Batara. Mazzerati will need to use all her dirty tricks to pick up a win against “Mogwai.” Batara boasts an 8-4 record in the cage and is coming off a three-fight winning streak. After taking a year off with a back injury “Mogwai” picked up a submission win when she returned to Combate Americas in April. She’s a jiu-jitsu practitioner who’s won three fights by submission and most everyone in attendance would love to see Mazzerati tap.
Greg Romero never got the No Limits Title shot against Drake one-on-one and with the Legend digging into the mix he’s on the outside looking in. Now he’s booked against Kyle Hawk who is looking for a big win and was awfully close to one last month. Hawk narrowly missed against “The Flip Artist” Matt Vandagriff at Beers and Bodyslams so collecting a W against the former No Limits Champ may push him into the No Limits Title conversation. The pressure is on Romero. He was a little “unlucky” I suppose, but he still had a chance at FSW10 (Didn’t get pinned). A loss here could be tough to overcome with a jam-packed No Limits division sporting guys like Douglas James, Vandagriff, TJ Perkins, and of course Ice and Remy.