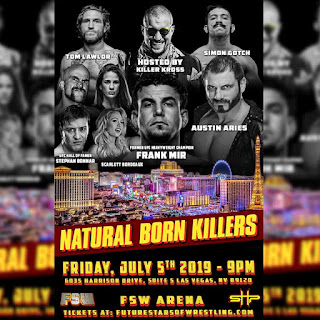 Friday night July 5th at the FSW Arena Future Stars of Wrestling (FSW) and Super Heel Promotions Presents Killer Kross’ Natural Born Killers featuring Frank Mir and Austin Aries. The former UFC Heavyweight Champion Mir arrived on Sunday, June 23rd after Aries interrupted Kross’ promo following his loss to Chris Bey.
We had a chance to speak to FSW Boss Joe DeFalco about how this whole idea came to be? “Kross talked about stuff like this couple of years ago. Now with Stephan Bonnar, Mir and other MMA guys training to wrestle and with the success of Bloodsport, we thought now with UFC fight week it was the perfect time to try and kick it off.” July 3-7 is International Fight Week coupled with Jon Jones at UFC 239 Saturday night. The card is loaded and DeFalco was happy with who they got, “We got exactly who we wanted with Mir and a legend like Dan Severn and mixed with Kross, Bonnar, "Filthy" Tom Lawlor, and (Simon) Gotch was a good get.”
“Relentless” Douglas James, Scarlett Bordeaux, “Pain Train” Dave Mazany, his sister Gina “Danger” Mazany are on the card along with “Warlord of Weird” Sinn Bodhi, and Ryan Couture. I asked how he felt about the show a couple days out, “Not enough time honestly to put it together,” DeFalco continued, “but we're at the FSW Arena so we don't need to sell as many tickets.” Did he anticipate another one? “We are hoping to do it 3-4 times per year based around the UFC in Vegas.”
He said the plan is not to be a series of cards with one-off fights as DeFalco explained, “We want to establish first and hopefully we will have a champion because everyone needs to fight for something. First impressions are most important and if it's clunky then nobody will care.  Bloodsport ran WrestleMania week so had good buzz but the 1st one was ok and the 3rd was crazy.” 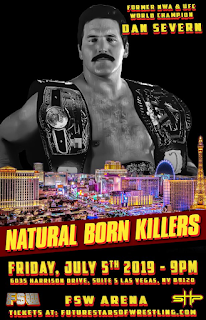 FSW has partnered with Super Heel Promotions for this event and this is the first time they’ve worked together and DeFalco wasn’t shy about his concerns, “Aaron (Aaron Portier w/Super Heel Promotions) and his partner hit me up about meeting and said they were interested in partnering up and investing in MECCA. I pitched this idea and they were all over it.  Aaron works with MMA and Boxing with Roy Jones etc. He’s a huge wrestling fan, and this was a good fit to get their feet wet and try and learn the business. I told them I'm not interested in helping another company water down the market. Why go into business yourself?”
Now that some time has passed and the smoke cleared I asked how he felt about FSW 10 and he said, “Our 10 year anniversary was a special thing that everything came together and we were blessed to have so many people there. The kids sold over 300 tickets most they ever sold, so those $10 tickets really blew things up and the show was stacked. It was a total perfect storm.” DeFalco isn’t one to sit around in the bowels of the FSW Arena and pat himself on the back, “so now we have to capitalize on the turnout and find new venue companies wanting what we can offer.” The work never ends for the FSW Boss.