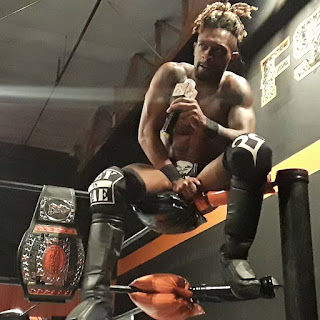 Future Stars of Wrestling (FSW) Heavyweight Champion the “Ultimate Finesser” Chris Bey has had a 2019 many wrestlers would only dream of. He beat Killer Kross at FSW 10 to continue a dominant run as Champion and things go his way there will be even more dream matches on the horizon including two former WWE Champions and the current FSW MECCA Grand Champion.
I asked the Champ his thoughts on his Title run so far, “If we’re being honest, I didn’t come to Vegas with the plan to become the FSW Heavyweight Champion, the facts are, when you’re the best this is what happens. I started it off by beating Hammerstone, I’ve defended it 6 times in the past 208 days and I wish I could defend it more.”
During his Reign, he’s faced “Iron Heart” Douglas James, “Uptown” Andy Brown, Shogun Jones, and his brother Suede Thompson. He also debuted with IMPACTWrestling and Ring of Honor (ROH) and while the 23-year-old is pleased with vanquishing Killer Kross at FSW 10 makes it clear he is far from finished in 2019. “I am a fighting champion and the proof is when I just made history and became the first FSW superstar to beat Killer Kross clean in that ring and I did it at our biggest show ever in the main event. A man that Moxley just came after (in Killer Kross), so does that not imply that I am next or should I just go sign my name on the petition?” Bey made it clear “I’ll find him (Moxley) if he don’t come for me.”
Who else does he want in the second half? “Regardless, I have submitted my legacy as a Living Las Vegas Legend and no one can ever take that away from me. As for who am I looking at in the second half? I want everyone who wants to prove they’re the best. Whether that be TJP, Ice Williams, or anyone outside of Vegas who wants the opportunity to submit their legacy by defeating me.” What about his old friend Johnny MECCA/Morrison who was very much a part of the MECCA assault with Kross? “Ahhh how could I forget. I owe him an asswhooping. He tried to make an example out of me, and he may be off doing his other things but rest assured that when I see him, it’s on sight. Payback is a bitch.” MECCA V?
Any of those opponents would be a great match for Bey as his stock rises and the legacy grows. The Champion returns Saturday, July 20th for High Octane and it’s a safe bet he’ll have a lot to say at the FSW Arena.