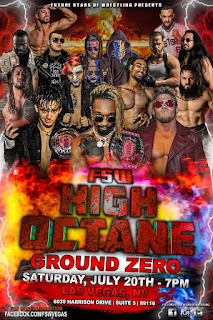 Future Stars of Wrestling (FSW) returns to the FSW Arena Saturday night July 20th. BELL TIME 7PMish. New FSW Nevada State and FSW Tag Champion Hammerstone along with his partner Graves, and Gabriel Gallo who played a key roll in FSW10. Sefa Fatu is also scheduled which should make things very interesting.
FSW Heavyweight Champion Chris Bey had plenty to say last week regarding who he wants to see next in an FSW ring. He went through a list including TJ Perkins, John Morrison and of course Jon Moxley. It’s safe to say we’d love him against any of those three and I’m interested in hearing what he says about the Kross victory. He made no bones about how important it was and where it put him among the all-time great wrestlers who’ve been through Southern Nevada. The Living Las Vegas Legend has enough quality talent looking for FSW Gold to keep him very busy for the rest of 2019.
No Limits Title Damian Drake (c) vs Ice Williams – We previewed this match two days ago and won’t rewrite it here. Great match and I hope it’s the Main Event. 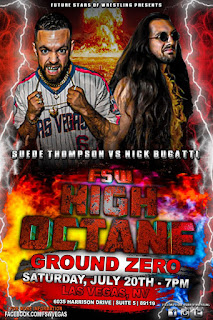 Title match this one is a close second. One, it will be entertaining with these three and how Suede deals with the Evil Vixen Mazzerati is worth the watch. Two and most important both guys need this one. Yes, Suede broke his losing streak at FSW10 winning the Bockwinkel, but a singles win over Bugatti puts him right back in the title mix. Bugatti is coming off a disappointing loss at FSW10 after his wild chair-throwing feud with Drake and Greg Romero, so the Italian Flamingo has a point to prove against Thompson. He came back with a lot of pomp but the circumstances have worked out in his favor. Good one.

Bonus Boyz (Clutch Kucera & Sugar Brown) vs The Following (Cut Throat Cody & Jakob Austin Young) – Ok this one may actually be second only because I’m excited to see Ice get a One on One Title shot. The Following were very impressive in their win over Hater Nation at FSW10 you immediately heard folks clamoring for more. Well…they’re back again and a win over another team with Sugar Brown on it could put them into the Tag Title mix. CTC didn’t look like he’d been out of the ring at all. His moves were crisp and if you spend too much time worrying about the cutter he’ll submit you. Jakob Austin is consistency personified. They got the biggest pop at FSW10 and likely will Saturday night. Anytime you count out the Bonus Boyz they find a way and have a legitimate beef with Cody i.e. Beers and Bodyslams in case they need added motivation. The best thing to happen to Clutch and Sugar was Gods of War winning the Tag Titles because they have a fresh opponent for a Title shot if they get the W. 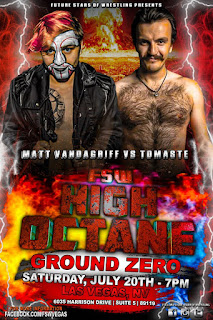 Matt Vandagriff vs Tomaste – It’s easy to look at Tomaste and think comedian Gallagher but this isn’t about comedians it’s about a quality wrestler and he's a dangerous opponent for Vandagriff. Tomaste is very smart and calculating in the ring. He knows when to take flight but is comfortable with the match on the ground by picking his spots and he’ll need to do that with the Flip Artist who works best from the air.
Remy Marcel vs Shaggy McLovin vs Kyle Hawk vs? – Not sure who the surprise person is and I have a few ideas, but regardless if Remy Marcel wins he should get a No Limits Title shot. Winning Scrambles are just as important as winning singles matches in the No Limits division and Marcel has been superb. He didn’t get the Cash in the Case but that was far from a No Limits match, and he’s one of the favorites if not the favorite. Kyle Hawk is due for a big win. He lost a tough one to Vandagriiff at Beers and Bodyslams in June but it was clear that Hawk can compete with anyone. His blueprint against Vandagriff should be followed by Tomaste as he was very successful at keeping him down for the majority of the match and had chances to win. Shaggy is not a rookie. He had a non-title match against Drake recently and a win here could put him right back in the ring except this time for a Title shot.