Funny Bone vs Frank The Tank is No Laughing Matter... 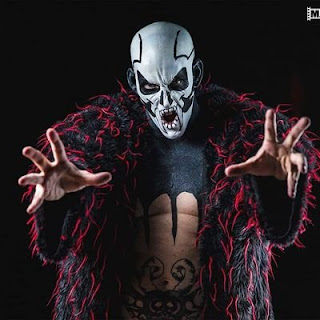 There is nothing funny about the Big Valley Wrestling (BVW) Heavyweight Championship contest between DEMIGOD of Death Funny Bone and BVW Champion Frank The Tank on Sunday, July 28th. BELL TIME 2PM. It was announced that Bone would be making his long-overdue return to the Sahara Event Center minutes after Frank pinned Da Shade at the Sheila Olive Fundraiser almost two weeks ago.
Funny Bone has been a fixture on the Las Vegas wrestling scene for over a decade and will take on the 350+ LB Titleholder in a match that is an amazing contrast in styles. Frank is the Behemoth with stunning agility who can perform suicide dives but prefers to work in space by propelling off the ropes to create offense. He won a Triple-Threat in his last defense pinning Shade after his originally signed opponent Sean Black became pre-occupied by BVW Las Vegas Champ Kevin Ducqets, but that’s none of my business though. Frank has been the Champion for nearly a year, but Sunday’s opponent may be his toughest one to date.
Your DEMIGOD of Death is so much more than just cool gear and an even better ring entrance. Bone can fight, folks. If you saw his match with Sinn Bodhi you’d understand. Funny has been in the ring with more than his share of opponents when he didn’t have the size advantage. He's one of the most versatile wrestlers in the Wild West. He’s won equal parts singles and Tag Gold and when you consider who trained him it should be no surprise. Nick Bockwinkel was not only one of the greatest singles wrestlers of all time, but his tag team with Ray Stevens won multiple AWA World Tag Titles in the seventies. 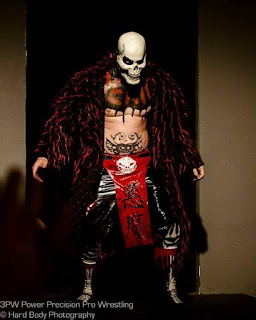 Funny Bone’s style works anywhere. He can do the flying stuff if you like, but he’s more than comfortable getting down and dirty. In fact, I think he prefers it judging by his wars in Town this yearNick Gage and the aforementioned Warlord of Weird. Even though he likes to fight it’s not easy to keep him down. Funny Bone constantly attacks and wastes little time between moves which allow little recovery time for his opponents. This strategy would work well for him against Frank because the BVW Champ wants to slow the match down and deliver punishment. Getting your hands on him is easier said than done and The Tank certainly will have his hands full Sunday afternoon.
with

If anyone is capable of stopping the Tank continuing to steamroll BVW it’s the DEMIGOD. The 37-year-old is as good as ever. He won his second Best of the West (BOTW) Title earlier this year and continues to headline cards all over the Wild West. Will he be able to stop the Tank and walk out of the SEC as the new Big Valley Champion?
Check out www.iamfunnybone.com and learn about the docuseries he is involved in. It has a fascinating bio about his family life and the people who have helped him develop and become the wrestler he is today. Really Good Stuff.
Good news from the Sheila Olive Fundraiser two weeks ago as Big Valley Wrestling confirmed that Ms. Olive was indeed able to get home to Kentucky although the family still has some expenses. The show was a major help for Frank and his family, but make no mistake that he still hates you.