Hammerstone will Represent MLW at N-1 Victory in August... 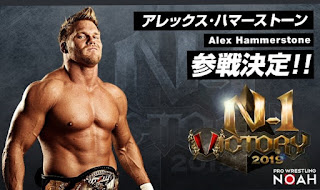 
It is with great honor that Major League Wrestling partners with Pro Wrestling NOAH to form an alliance. This all-encompassing partnership will feature athletes exchanged between the two organizations as well as opportunities to share content in addition to other opportunities. The partnership will commence with an MLW wrestler participating in the 2019 N-1 Victory tour that commences this August.  The wrestler will be revealed at a later date.


“Pro Wrestling NOAH has a rich history of promoting some of the grandest wrestling bouts in the history of the sport,” said MLW CEO and Founder Court Bauer. “This is a very exciting partnership.  We look forward to joining NOAH and beginning a new voyage for a new era.”


The wrestler at a later date didn’t take long to announce and should’ve been an easy choice. MLW National Openweight Champion Alex Hammerstone is going to Japan in August to rep The League. Your Boy Hammer is undefeated in singles and tag competition since arriving in February. He defeated Brian Pillman Jr. to become the first MLW National Openweight Champion. Recently on Fusion, he dominated the Hart Foundation’s, Davey Boy Smith Jr. before the second generation Bulldog attacked with a chair earning the disqualification. Hammerstone has been to Japan before, and in 2017 he beat 7’ 5” Brazilian Beast Montanha Silva on the night of the Karl Gotch Cup.

The newly minted N-1 Victory for 2019 is a round-robin tournament that had recently been held in the winter and was known as Global League. Traditionally the winner of the tournament receives a shot at the GHC Championship. Yoshihiro Takayama won the first edition of the tournament in 2010, and other notable winners are Yuji Nagata, Takeshi Morishima, KENTA, and Naomichi Marufuji. To say that Your Boy Hammer is on fire this summer is an understatement. Not only did he collect the MLW Openweight Title, but he’s still putting work in Vegas recently doing the double at FSW10  picking up the Nevada State and FSW Tag Team Titles.