It's a Dogfight: Exceptional & Tenacious vs Sky High July 14th... 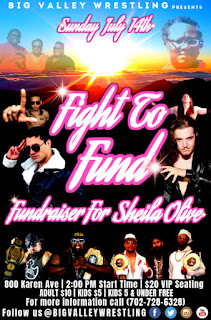 Sunday, July 14th at Big Valley Wrestling’s (BVW) Fight to Fund a Fundraiser for Sheila Olive Sky High (Mondo Roxx & Robbie Lit) looks for a possible Big Valley Wrestling Tag Team Title shot and a win over the former Champions could do the trick. The brothers Roxx and Lit formerly known as Chill and Blaze team up after Robbie returned last time to the Sahara Event Center after being out for five months with an injury. While his brother was out “The Ace of Diamonds” Mondo Roxx has gotten over with the Las Vegas fans with his energy, enthusiasm and not to mention by winning matches. He qualified for Limitless and certainly has the confidence to win Gold. They changed the name to complement their Aviation background and now Mondo’s bomber jacket makes perfect sense.
Exceptional and Tenacious (Ricky Triforce Tenacious & Alexander Braven) have had a rough go of it lately in BVW and the former Champions hope to get back in the win column by bringing Sky High down to Earth. In their defense, for a variety of reasons they haven’t worked together consistently since they dropped the belts. They were supposed to team last time out until Braven was unable to compete but then Roxx showed up. Tenacious teamed with Roxx a month ago and things were going swimmingly until Ricky got an “accidental” punch in the face for his hard work. That led Braven to intervene in a Roxx beatdown, but they didn’t anticipate the return of Robbie who came to assist.
This feud has stretched across years and state lines with more on the line Sunday afternoon than winning a grudge match. If Sky High comes out with their hands raised it’s hard to argue they wouldn’t be next for the Tag Champs Fresco-Dinero (Mondo Dinero & Fresco-Mattic) who are making their BVW Title reign look easy. Roxx and Lit are tough to gameplan for. Their speed and quickness can’t be duplicated in a camp, and we saw prior to Robbie’s injury just how difficult it can be.
However, Exceptional and Tenacious have been in huge BVW matches before. They held the straps for nearly a year and would like nothing more than to thwart their rivals advance. Either of these teams could pose a real threat to the Champions who are doing the best wrestling of their careers right now. Fresco-Dinero under the expert tutelage of their Manager Primo Pulpo has blossomed into a dominant force in Big Valley.
We know Tenacious is not impressed with the current Champs but least of all with his opponents on Sunday, and didn't mix his words, “I never liked my brother, so when I think of Mondo and Robbie I already get mad. But I've got something better than a brother, Or a Vest friend, I've got the instrumental to my lyrics, I've got the sequined TAG team machine, I've got The Exception. And together, we'll knock any flight out of the sky. Buckle up Sky High, cuz you're crashing down this Sunday at BVW.”