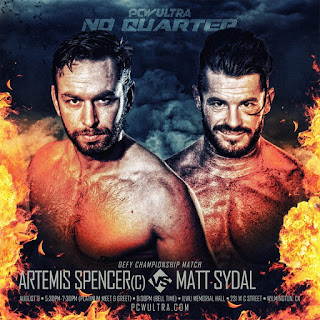 PCW ULTRA announced more matches this morning for No Quarter on August 9th including the ULTRA Openweight Championship as Champion Mil Muertes defends his Belt against Dan Maff who we all remember from the WARBEAST bloodbath at WrestleSummit, and Tessa Blanchard defends her Women’s Crown against Sumie Sakai. The result of a DEFY Title Match in the Northwest will either be another chance to win Gold for one or it could be a truly “Relentless” Three-Way Dance.
Artemis Spencer will defend the DEFY 8XGP Title against Matt Sydal “if” he is still the champ by that date. Spencer has a DEFY Title defense against "Relentless" Douglas James on July 26th at Washington Hall in Seattle and needs to get past him first. That is easier said than done, but Artemis has a list of wins any champion would be proud of. Despite his win over Rey Fenix a few weeks prior, he shocked the Wild West when he beat Shane “Swerve” Strickland for the Cascade Gold to close 2018. However, he has followed it up this year with wins over Dezmond Xavier, MJF, Ethan HD, PCW ULTRA Ultra Light Champion “Superstar” Jake Atlas, and former WWE Cruiserweight Champ TJ Perkins.
Matt Sydal is a gifted wrestler who lost the first quarter of the year with injury and missed a shot at the PCW ULTRA Tile early this year as a result. Sydal can work anywhere in the ring and has a 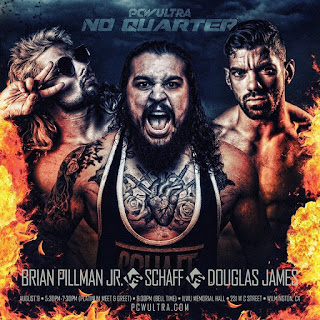 smooth aerial attack that looks effortless. ULTRA also announced that Douglas James faces SCHAFF and Brian Pillman Jr. in a Three-Way Dance which could also be a DEFY Title bout. Junior beat Douglas James in June at Mind Crawler and SCHAFF won his ULTRA debut in a Four-Way. The Monster dropped a tough one to DJ in Portland last month and could look to exact some revenge. Despite the match confusion last time with the “Baddest MOTHER F***ER in Pro Wrestling” he prevailed against three lightning quick guys Eli Everfly, Matt Vandagriff, and Lucas Riley. Some thought he should have won easily, but remember last fall when Hammerstone was heavily favored in a similar contest that Everfly prevailed in. Never underestimate the power of a guy with a green tongue.

DJ knows all about “The Fly” but even if he is DEFY Champion he just needs a win in Wilmington. James has yet to get his hand raised since his triumphant return to ULTRA from injury in January. This hasn’t affected him elsewhere winning Gold in Oregon, but there is little doubt wins in the ULTRAtorium mean more. He’s been embraced by the fans and is easily one of the most popular wrestlers and they would like nothing more than to see him get a victory back home. Brian Pillman Jr. spoiled it last time out and will have to contend with SCHAFF also. We can hope the bleach blonde has grown out.