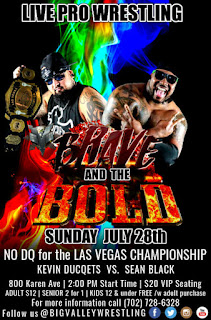 Big Valley Wrestling (BVW) continues their busy summer this Sunday, July 28th with The Brave and the Bold at the Sahara Event Center. Two Titles are on the line and two qualifiers with three spots up for grabs in the inaugural Sin City Showdown on Labor Day Weekend. This is a strong card and Big Valley looks to keep the momentum going that started with Unstoppable in June. Happy Birthday to everyone’s favorite Wrestling Singer Ricky Tenacious.
Las Vegas Title: No Disqualification:  Kevin Ducqets (c) vs Sean Black – Katie bar the door because this match is not for the faint of heart. Kevin Ducqets lost the Las Vegas Championship at Cauliflower Alley but showed his true metal by ultimately retiring his bitter enemy Leon Hater at Unstoppable June 30th to the chagrin of the fans. He forcibly removed Sean Black from his HW Title Match two weeks ago and now has to deal with the Challenger one-on-one. Black is a very happy guy and rarely brings less than a smile to the ring, but will need a different demeanor against Ducqets as Hater found out. It’s great to be cheered, but sometimes you can’t worry about that and he’ll need to put his head down and go get that belt. A no disqualification sets up nicely for the Champ, but Sean Black is as tough as they come. Match of the night/afternoon?
Three-way tag (Non-Title): Fresco-Dinero (Fresco-Mattic & Mondo Dinero) (c) vs Exceptional & Tenacious vs Sky High (Robbie Lit & Mondo Rox)- It could be easy for the Big Valley Champions to take this match off and not worry about qualifying for the Sin City Showdown. That’s not what these Champions do. They need to win this match to keep their foot on the throat of the Tag Team division and be sure   Primo Pulpo will have his Charge’s ready. Ricky Tenacious is so serious about this match he moved his training camp to Santa Barbara early this week to get away from any potential distractions. Don’t let the vacation stuff fool you. E & T need a win really bad if they want to remain in the Tag Team mix. Even the prolific voice of BVW Johnny Rock has speculated the former Champs are done, and it’s been a minute since they got hands-raised together, so it’s difficult to dispute what Rock implied. Sky High had flashes two weeks ago and more time together again will only help these talented brothers. Lit returned from injury a month ago and a win here could be the jet fuel needed to win Big Valley Gold. 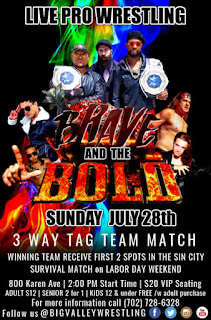 Sin City Survival Qualifying match: Big Dirty Vs. Reckless R.L. Washington – When Big Dirty vanquished Captain Buggy last time out he looked at Reckless and said, “This is for you.” It was game over for the clown pirate, and now he has his sights set on Buggy’s partner. He may not necessarily “look the part” but one thing he does a lot of in Southern Nevada is win matches. Dirty wants to win Big Valley Gold and he can’t afford any slips against his young foe.

BVW Contract rematch: "High Flying Sensation" Steven Andrews vs "Charming" Biagio Crescenzo – After the controversy at Unstoppable this one is one of the most anticipated contests Sunday afternoon. Who will walk out with a BVW contract? Here’s our preview of the match:
https://www.brianronovech.com/2019/07/will-big-valley-conract-be-charming-or.html

BVW Heavyweight Championship: Frank The Tank (c) vs Funny Bone – Frank has been dominant as Big Valley Champion and Funny Bone doesn’t care. Bone will be at the SEC hell-bent to “murder his face” and win the Gold. Frank has had tough opponents during his nearly 365 day run as Kingpin although many close to Big Valley believe this will be his toughest defense yet. Frank is big and strong and cannot let Bone create space. If the match is methodical and strategic it favors the Champion, but Funny Bone is an expert at making you fight his fight. Very hard to bet against Frank.
https://www.brianronovech.com/2019/07/funny-bone-vs-frank-tank-is-no-laughing.html

Also: Bobby Bemer returns with his monster Congo Crush, and Captain Buggy will be here. There will also be a Lucha Libre Tag Match featuring Nefasto y El Tigre vs Unam y Pantera
at July 26, 2019