Survival of the Fittest Set for August at Sam's Town Live... 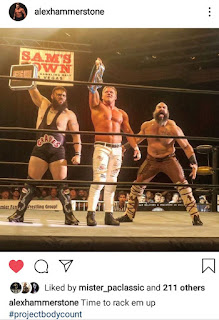 Future Stars of Wrestling (FSW) confirmed Survival of the Fittest will be held Saturday, August 17th at Sam’s Town Live. This will mark the first time since selling out the place for FSW10 as they hope to keep the momentum going through the summer. FSW is also returning to the FSW Arena on Saturday night July 20th and either August 2nd or 3rd but I was told it looks more like Friday the2nd.

Hopefully, we’ll get some answers to the questions raised from FSW 10 like:
Who is next for Damian Drake?
What will Chris Bey say to the fans that turned on him?
Where was the referee?
When will Shogun Jones have a match without a strange finish?
Why Graves Why?

Nevada State and FSW Tag Champion Hammerstone posted a photo of himself on Social Media (of course) with Graves and Gabriel Gallo as #Projectbodycount. It’s certainly a fitting name for what looks to be a devastating trio from the Grand Canyon State. In case you lived under a rock recently Your Boy Hammer won the Nevada State Title and the FSW Tag Tiles after reuniting with Gods of War partner Graves at FSW10. You can bet they’re pushing towards August 17th and will be very dangerous again at Sam’s Town Live. The former Champ Sefa Fatu has a lot of friends and we know he has family, so you can be sure the former Champ will be ready to “whoop somebody’s ass” when he steps back in an FSW ring.
Last week I erroneously included Shaggy McLovin on my list of rookies. The change was made and I added Macho Mouse. However, Macho and Fresco-Mattic traded GIF’s as a result of the Mouse’s earlier exclusion in the article while I praised Fresco and his Tag Team exploits. Here’s hoping Macho and Fresco will be able to settle their differences in the squared circle. To be fair it’s a good match on paper and both Man and Mouse are tall and lean, so there wouldn’t be any real height advantage. Plus it’s a bout between two of the top rookies in Las Vegas which is always appealing.
Congratulations to Kenny King on getting the biggest win of his career at Ring of Honor’s (ROH) Best in the World against Jay Lethal last weekend winning their best of Three series 2-1. King finished the contest and the series with a Royal Flush after hitting another Lethal Injection. It was good to see King get the best of the former ROH Champ in what could be a springboard to his own ROH World Title as he’s been ROH Tag Champ (w/Rhett Titus as All Night Express) and is a 2X ROH TV Champion.