What's in a Name? Why Douglas James is now "Iron Heart"... 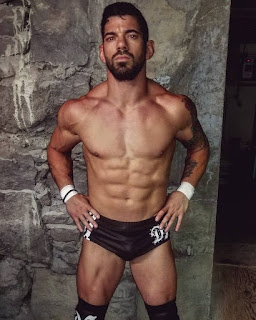 moniker “Relentless” anymore. In some cases, this wouldn’t be news, but in DJ’s the name “Relentless” has been a major part of his wrestling brand as a whole, and who he is as a person. He came back earlier this year from a serious hip injury and has begun adding Championships to the trophy case again taking the Limitless Tourney in April and the DOA strap in June.

You think nicknames/moniker don’t matter? What about “American Dream” “The Brain” “Stone Cold” “Hitman” “Nature Boy” or the “Heartbreak Kid?” All of them can be referenced without ever mentioning their name, and are as important as the wrestler themselves and it sometimes even signifies who they are as a person not just as a talent.
Example: Did you see the WrestleMania XIII match between Stone Cold and Hitman? Get it? We’ve all seen wrestlers struggle until they connect with a name or character i.e. Stone Cold was The Ringmaster first.
Since James announced on July 4th that he was one year sober I expected a nickname along that line. Two days ago he announced that he is now “Ironheart” Douglas James and the name fits. I was curious why he decided to make a major change like this?
“Well, I am relentless by nature. It's just who I am. I am doing well with wrestling but I'm not on the main stage and Darby Allin at All Elite Wrestling (AEW) is using relentless now. Nothing but respect, but I'm not going to be second fiddle to anyone. My heart got me to where I'm at. I live for this and can’t be broken. I have a heart of iron, so that's how Iron Heart was born.” Allin’s signing with AEW was announced by him spray painting “Relentless” and he has the word tattooed on the back of his neck. I’m not saying a name in ink signifies ownership or some folks would have a lot of problems with exes.
It’s a smart decision and sharing a name with someone who is going to be on TV weekly in a few months may not be the best idea. James said even though it’s a major decision it wasn’t difficult, “I understand how the game works, so it wasn’t a tough decision but had to make sure I was being true to me.” He said he had a few ideas before he settled, “I was thinking fearless, limitless, but Keith Lee or timeless, but I think iron heart really fits who I am and is a bit more unique.”  Finally, was he asked to do it? “Nope. My own decision.”