Will Big Valley Contract be Charming or High Flying? 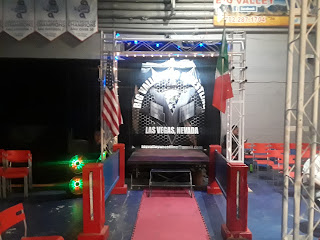 In front of a packed house at the Sahara Event Center, three men vied for a Big Valley Wrestling (BVW) contract, and when the smoke cleared it was a potential match of the year, and maybe it’s most controversial. Now the two men left standing will meet for the coveted contract and the opportunity to be a member of the Big Valley Roster. Both are Champions in California and would be tremendous additions to the Las Vegas Wrestling Scene. The whole sordid tale began at Unstoppable last month when Simon Lotto, "The High Flying Sensation" Steven Andrews, and "Charming" Biagio Crescenzo competed for the BVW deal. It began with Biagio and Lotto bickering in the center of the ring. It was a bluff and viciously attacked Andrews in the corner with right hands that may have had him eating soft food for a spell. The Alpha Omega star got his wits together, and turned the tide with a Corkscrew Plancha that took out both men, and sent the Charming one to the floor. When Andrews attempted to press the pace he was shuttered by a perfect right by Lotto who followed that one up with a couple more for good measure.
Each man was trading moves until Andrews hit a perfect Spaceman Senton out of the ring that had the crowd gasping for air. As the match wore on Lotto was outside the ring and Biagio caught Andrews in a submission position. I’m not sure if Steven knew where he was or was trying to twist out when he executed a pinning combination on his opponent, but then while the pin was counted he tapped on Biagio’s face and submitted. It looked as if Andrews would be declared the winner, but another referee got involved and the cumulative decision became a draw. Big Valley President Benny Espinosa ruled decisively before anyone had left the ring and El Jefe announced that Andrews and Biagio would square-off 1-on-1 this Sunday at Brave and the Bold for all the marbles.

These two combatants match up very well together. The 23-year-old is solid as a rock, and though he may not be the tallest he is one of the strongest pound for pound in BVW. Crescenzo caught Andrews in mid-air, rolled and turned it into a side slam/driver. Whatever it was you couldn’t help but be impressed. He’s stocky with a good base, quality submission skills, and don’t take his strikes for granted. He delivered some beautiful punches in their first encounter, and Andrews probably still has nightmares from those blistering shots.
The Sensation has a superb aerial game that he makes look effortless. He’s smooth but got caught multiple times by Crescenzo who was well prepared. Complacency has lost many a wrestler a Championship, and the SoCal star needs to be wary of his more than capable opposition. The High Flying Sensation wants to avoid a slugfest at all costs but has to be more disciplined in the air to avoid the pitfalls from June 30th. Biagio enters this match with the momentum and believes he should have gotten the victory last time they shared a ring.
What fireworks can we expect Sunday afternoon? Very simple, the winner gets the contract.
at July 25, 2019