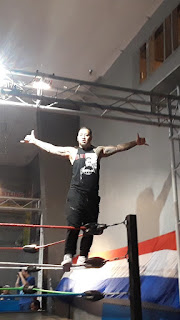 A much more comfortable and cool Sahara Event Center played host to Big Valley Wrestling’s (BVW)Rebels and Renegades this afternoon, and we had no idea what to expect, and neither did a certain Champion. The Sahara Event Center hosted another packed house, and they weren’t disappointed. Just when Kevin Ducqets thought he had all the answers, there was a new Problem to deal with, and maybe the biggest of them all. Sefa Fatu showed up after Ducqets and SGT Major “defeated” the BVW Tag Team Champions Fresco-Dinero (Fresco-Mattic & Mondo DInero) in the Main Event. It was a non-title match for the Champs who sported their brand new swag in the ring, and fortunately, it was. A low-blow from Ducqets made the difference in a physical affair. Now the Champs can concentrate on the SCS in a few weeks.
We thought we had the big announcement earlier in the card when BVW El Jefe Benny Espinosa announced that Major League Wrestling’s (MLW) Ace Romero would be challenging Frank “The Tank” at Biggest and the Baddest September 1st. Not so fast my friend…
The Son of Rikishi cleared the ring of Ducqets and SGT Major after a donnybrook occurred shortly after the pin. Sky High (Robbie Lit & Mondo Rox) and Exceptional & Tenacious already brought their feud back to the ring, but everything changed when Fatu’s music hit. Nobody saw it coming. Fresh off winning new Gold in Arizona last night Fatu arrived and challenged “The Delinquent” for the Las Vegas Championship September 1st at Biggest and the Baddest. Kevin wanted to know his opponent, but be careful what you wish for. He better start watching tape tonight.
Congo Crush and SGT Major qualified for the Sin City Survival Match on September 1st with wins this afternoon. We later learned the DEMIGOD of Death Funny Bone was the final participant in the SCS fresh off his DQ “loss” to Frank for the Valley Gold two weeks ago. A deathmatch style contest fits perfect for all three competitors, and none would be a surprise to come out on top. Congo’s Manager Bobby Beamer has been screaming for a Title Match and now his monster is just a win away. 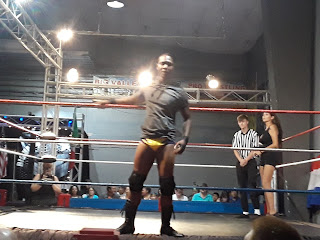 RL Washington and “Vanilla Gorilla” Sean Xavier got wins this afternoon, but unfortunately for Xavier, the Las Vegas Champion wasn’t impressed. Ducqets and SGT Major attacked Xavier following his victory. Washington beat Chris Brady who’s looking for a W. It was a very competitive match and there were moments when it looked like he’d get a win, but Reckless was too much. Washington is a surly, angry guy, but it translates well. He’s a physical competitor who likes to trade shots, but we saw today he is more than capable on the mat. Both guys are solid prospects. Vanilla vs Reckless?

“Exceptional” Alexander Braven finished Mondo Rox with a series of slams and suplexes to get a big victory at the SEC. The Tag rivals were split into singles bouts before the melee, and even though nobody cares about Braven he got the win. Mondo had a couple opportunities to execute offense with aerial moves, but kept losing his footing and wasn’t able to execute as well as he wanted. Ricky Tenacious gives singing a bad name, but he sure is entertaining. He faced the other brother Robbie Lit, but a wardrobe malfunction early on could have played a major role. Tenacious certainly had plenty of opportunities on Sunday, Lit was able to use his athleticism to pick up the win. Robbie has been super-impressive since returning from injury. I had a brief chat with BVW El Jefe Benny Espinosa after the final bell and he glowed about Sefa but made a point to mention how much he likes his Tag Team division with a huge grin. It’s easy to understand why.
Big Valley Wrestling has a ton of momentum right now and they are clicking on all cylinders. Fatu, Ace Romero and Funny Bone have made September 1st a must-see as there isn’t a better place than Vegas right now for great pro wrestling.