BVW Preview: Who will be the Final 3 Sin City Survival Qualifiers?

This Sunday at the Sahara Event Center, Big Valley Wrestling (BVW) presents the FINAL 3 Sin City Survival Qualifying matches featuring old rivals, a Clown Pirate, and maybe the happiest guy in Wrestling. BELL TIME 2PM. Two weeks ago the “Death Collector” Big Dirty qualified by getting his hand raised against RL Washington, and BVW Tag Champs Fresco-Dinero (Fresco-Mattic & Mondo Dinero) won a Tag Scramble to earn their birth. The Sin City Survival Match is September 1st at the Biggest and the Baddest is a no-holds-barred, anything goes match and the winner gets a shot at any Valley Gold they wish. Six compete but only 1 is the Sin City Survivor.
Here’s a quick look at 2 of the Sunday Qualies:
Sean Black vs Captain Buggy – The Clown Pirate got a nice win last time out against “Bad Boy” Brady who’s had trouble hitting the pay window in Southern Nevada. Buggy used consistent pressure against Brady and a few tricks up his sleeve to pull out the win. That’s not going to cut it against Sean Black. A normally happy, jovial individual, Black has to be fuming over what happened last time he was in a Valley ring. During his match with Las Vegas Champion Kevin Ducqets, SGT Major returned and attacked Sean and may have prevented  him from going home with the Strap. Black is big, powerful, and should overwhelm the Captain with his size alone, but we know about how slick his opponent is. Buggy routinely tries to sneak weapons into the ring, but the Big Valley officials are certainly onto his shenanigans. If he qualifies those weapons would be a great advantage. Who doesn’t want to bring knives to a wrestling match? Unless something fishy happens Sean qualifies and gets the Dub. 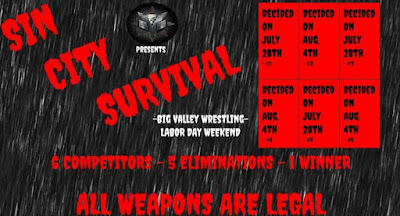 Congo Crush vs Da Shade – This one will be interesting and to say it’s a contrast of styles would be an understatement. Crush has been dominant under Bobby Beamer’s watchful eye and if this monster qualifies look out. Shade had his chances against Frank a month ago for the Big Valley Gold and this would be a great way to get back on track. It’s not the easiest guy to do it against.

Editors Note: I originally wrote these as Sin City Survival Qualifiers. My mistake.
Sky High and Exceptional and Tenacious split up in what should be two great singles matches:
Ricky Tenacious vs Robby Lit – Exceptional and Tenacious have developed quite the feud with the brothers known as Sky High (Mondo Rox & Robbie Lit) and Sunday the two teams split up and meet in singles at the SEC. Don’t be fooled by the voice of an angel, Tenacious can wrestle. When he has space he can move well and brings surprising power. He loves to play the mental game and will certainly try and gain an advantage on Lit. Robbie has looked exceptional since he returned last month and continues to get more comfortable in the ring. He looks a bit bigger, is more defined so it’s clear he’s working on his game and he’ll need all of that to pick up a victory Sunday.
Mondo Rox vs “Exceptional” Alexander Braven – Nobody cares about Braven, but you can bet he cares about qualifying for the Sin City Survival match September 1st.  A win by either him or Ricky would be a great boost for two guys who’ve found wins hard to come by lately. Braven has the size advantage over Mondo and will need to use it because his speed is legit. Mondo has a tenacious aerial game and is always looking to go airborne. Rox scales the buckles quickly having no problems executing offense from the high-risk portion of the wrestling ring. Mondo has looked great with his brother, but let’s not forget the single's success Mondo had the first part of 2019. He is very tough in this spot. It’s hard to conceive that either of these matches won’t have outside something going on and could be a key to victory for either guy. This feud in any form is far from over.