Big Valley Wrestling (BVW) returns with Rebels and Renegades Sunday, August 11th and the in-ring return of SGT Major. Technically he returned two weeks ago when he dismantled Sean Black to help Kevin Ducqets retain his Las Vegas Championship. However, this time he will team with “The Delinquent” to take on the hottest team in Southern Nevada Fresco-Dinero (Fresco-Mattic & Mondo Dinero) in the Main Event at the Sahara Event Center. BELL TIME 2PM.
Major had his “indefinite suspension” lifted and picked up where he left off. As Black and Ducqets went to War the good Major made his inauspicious return, and nearly put Sean Black through the ring two weeks ago. While Black will be busy qualifying for a spot in the Sin City Survival Match September 1st don’t think we’ve heard the last of him in this whole fracas. Sgt Major is one of the only wrestlers in Big Valley history to pin BVW Champion Frank “The Tank” and he was the “Sgt of Defense” for the notorious Church of Wrestling a couple years ago. When I asked about him the BVW Official I spoke with said, “Sgt is familiar with being the insurance policy for his clients.” The powerhouse is definitely that for the Las Vegas Champion who doesn’t need much help as you could argue that Ducqets is pound for pound the Top Guy in the Valley right now, and a leading candidate for Wrestler of the Year.
Ducqets and Major are a force to be reckoned with and a victory over the Tag Team Champs would send shockwaves throughout the Las Vegas Wrestling Scene. They would be eligible for a Tag Title shot and it would severely hamper the momentum of Fresco-Dinero. The current BVW Titleholders have cut the check since ripping the Titles away from Exceptional and Tenacious earlier this year. They’ve been dominant and certainly meet their match Sunday. In the Non-Title Tilt at the SEC the Champs are looking to stay sharp as they head into the Sin City Survival Match September 1st at Biggest and the Baddest. They remained hot on Sunday’s picking up a Tag win elsewhere last weekend and would love to pick up another one at home. 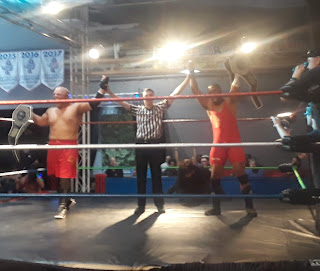 Their Manager Primo Pulpo’s expert tutelage keeps this team sharp, but X’s and O’s aren’t enough against these opponents. Ducqets and Major have ZERO qualms about bending, breaking, butchering the rules to gain victory. No Titles are at stake so this match could just be an opportunity to impose their will on the Champs and try to establish superiority within the Valley. Fresco-Dinero have no problem with a fight. They’ll be ready for anything Sunday and understand the importance of coming out on top in the Main Event.
Also, BVW Owner, Benny Espinosa has a major announcement regarding Frank’s opponent on September 1st for the Big Valley Title. Speculation is rampant over who it could be, and after his last defense against Funny Bone maybe a rematch is in the cards.
Big Dirty qualified for Sin City over Reckless Washington two weeks ago and returns to the Big Valley ring along with his prior opponent. The final three Sin City Qualifiers will be at the SEC Sunday featuring Black vs Captain Buggy, and also two top teams split up in singles as “Exceptional” Alexander Braven battles Mondo Rox and Robbie Lit vs Ricky “Tenacious.” This is arguably the best Tag Team feud in Las Vegas right now.