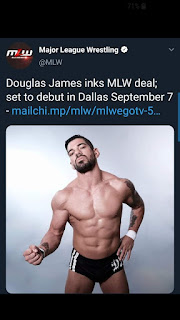 Major League Wrestling (MLW) has signed “Ironheart” Douglas James and the Limitless Tournament winner will make his League debut September 7th in Dallas. No word on his opponent yet. James has had an amazing 2019 since he returned in January from a dislocated hip, and joins a company with serious momentum. They signed other top west coast talents like WARBEAST and Alexander Hammerstone earlier this year and they already have Gold.
DJ will fit right into a very deep Middleweight division and has all the tools to add an even bigger Title to his trophy case. This is well-earned for a guy that was told by some last year he may never wrestle again. Not only has he wrestled, but is better than ever. “DJ is the evolution of what it is to be a hybrid professional wrestler,” said MLW CEO Court Bauer on MLW.com earlier today.
James had this to say to Las Vegas Wrestling Scene about the signing, “I have been wanting to be a professional wrestler since I was 7. This is all I have ever wanted to do. I’m just beyond excited to join MLW and take things to another level. This is my time. My heart is full.” James also confirmed that he can still accept Indie bookings, but he is exclusive to MLW for television. Congrats DJ, well earned.