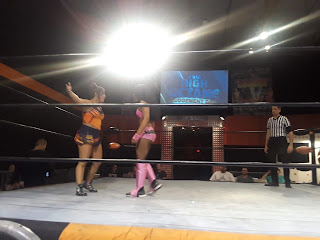 Despite unexpected changes to the Future Stars of Wrestling (FSW) card, it was a great night at the very hot and very packed FSW Arena. The Streak continued as the FSW Boss Joe DeFalco was in attendance last night to the surprise of NOBODY. Several young stars took advantage of the opportunities and shined.
The “Pre-Show” had a great Six-Man with young stars including Arizona’s WATSON. He’s been facing Top Guys in the Grand Canyon State and SoCal and it proves that tough competition makes you better. He’s faced Hammerstone, Gabriel Gallo, Sefa Fatu and Royce Isaacs this year and it shows. One of his partners Hero Leu will be a major breakout candidate in late 2019 and into 2020. He’s getting his hand raised often and looks more confident than ever. It’s easy to think that Macho Mouse is just a comedy gimmick, but no. He’s a tough customer who needs a singles match with Fresco-Mattic. Primo Pulpo led Fresco-Dinero (Fresco-Mattic & Mondo Dinero) who were on the losing end of the contest, and are ready to improve their competition level (see WATSON). Last but not least Newcomer Joshua Colon also impressed and wasted little time "endearing" himself to the FSW Fans.
I'm not sure anyone was happier to be at the Arena last night that Kyra Batara and the throng of fans that came to cheer her on had to be happy. She looked great and was beating down Mazzerati when Nick Bugatti took her and Suede Thompson out. This could be a Neverending Story.
Does anyone believe Cut Throat Cody wrestled only once in two years? Me either. The Following Gods of War are going to defend the FSW Tag Team Titles Cody and Jay Café need to be in the other corner. They deserve a Title shot. A match with former Champs One Percent (Royce Isaacs & Jorel Nelson) is enticing. 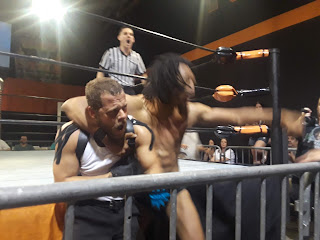 will win the FSW Tag Championship at some point. They picked up another victory this time against youngsters VIP and Lazarus. If the

Shaggy McLovin earned his spot on Survival of the Fittest by just winning baby. He picked up a Four Man Scramble victory last night then got involved in the Ice Williams-Remy Marcel scrum after the bell. It looks like he’ll team with a reluctant Williams and No Limits Champion Damian Drake against Sal E’s group of “The New York Legend” Marcel and the newly signed Bonus Boyz (Clutch Kucera & Sugar Brown). The “Skatepark Scumbag” had missed out on some chances for a bigger spotlight, but not this time. Good work Shag.
FSW No Limits Champion Damian Drake renewed his early 2019 rivalry with Matt Vandagriff picking up a tough win. Later he interrupted the pseudo-number One Contender’s Match between Ice and Marcel leading to the scrum mentioned above. His partners are young and talented. We’ve said it before here that Drake has done his best work under the brightest lights in 2019 so don’t expect anything different.
Sky High (Robbie Lit & Mondo Rox) looked well on their way to a win over Valley rivals Exceptional & Tenacious when Hammerstone arrived with Graves, and Gabriel Gallo and decimated them. However, prior to the brothers have to be getting frustrated as they try to pick up the first win of their reunion flight. I don’t see them waiting too much longer for that elusive W. 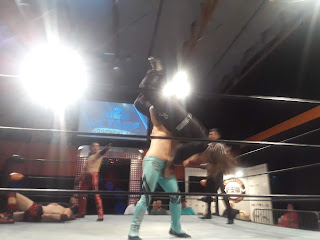 The reason for the demolition was so Hammerstone could call out the FSW locker room citing the absence of FSW Champion Chris Bey, One Percent, and Sefa Fatu. Shogun Jones answered the challenge and “The Business” defended the Nevada State Title in the Main Event after Bey-Graves was scrapped. Shogun, 2018 Rookie of the Year doesn’t shy away from opportunities and came out to applause even shaking hands with the FSW Fans. It clear to me that if you wrestle Hammerstone or Exceptional & Tenacious you get cheered. Shogun keeps getting closer to that elusive first Championship and don't be surprised if it happens before year’s end. The match was a brutal struggle and Jones had to fend off interference from both Gallo and Graves throughout the contest. It took everything Your Boy Hammer had to get the victory with a well-timed roll-up.

Great crowd and a great show with plenty of questions answered and some new ones as we go back to Sam’s Town in two weeks.